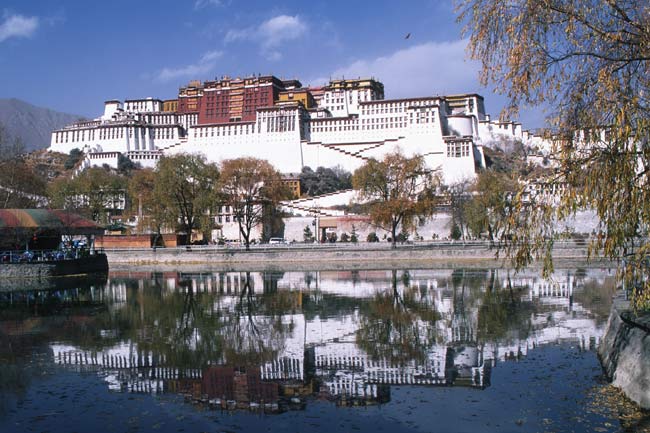 This is a tour to check the possibilities for taking pictures along one of the most exiting railway lines of the world. We'll visit a masterpiece of railway and civil engineering, a salt transporting narrow gauge line as well as a few of the highlights of Tibet. As well, we have a extension for steam photography, including JS and SY locomotives, available at the end of the main tour.

July 1st, 2006, the highest railway on earth was opened to the public. The line is called Qing Zang line. Kilometre Zero is in Xining. Endless wilderness, huge, rocky valleys, mighty mountains over 6,000 metres height and permafrost on the highest points along the line are some of the characteristics of this ultra expensive line. More than half a kilometre long bridges crossing dry valleys, snow covered mountains are in the backdrop, large, flat high altitude plateaus, full of stones in an exiting open and lonely countryside where the stars are shining even brighter than in Inner Mongolia, these are the surroundings of the new line. There are several summits on the line. The highest is at Tanggulashan at an altitude of 5072 metres above sea level. The longest tunnel is the Yangbaling tunnel no. 1 with a length of 3.3 km.

Despite some DF4Bs, recently built DF8 double section diesel locomotives in white and green livery are responsible for the traction. The locomotives have front-end doors, so the crew can walk trough all sections.

The scheduled times are ambitious. For a distance of 1,135 km from Geermu (Golmud) to Lhasa the fastest train takes only 14 hours and ten minutes. All passenger coaches are air conditioned and pressurized because of the altitude. Passenger trains are coming from Beijing (daily), Chengdu and Chongqing (alternating days) as well from Xining and Lanzhou (alternating days).

Southwest of Lanzhou, a spectacular branch line, operated with JS class 2-8-2s, leads through the gorge of the Yellow River to Liujiaxia. Unfortunately there is only one train during daylight. This train departs Liujiaxia in the afternoon, tender first. However, we can make an exiting shot in the gorge of the Yellow River. This position is over the river from the side with a mountain backdrop, so it is not that important that the loco is running tender first. Sometimes the train operates with a banker or pusher engine at the end of the train, making photos particularly interesting and dramatic. 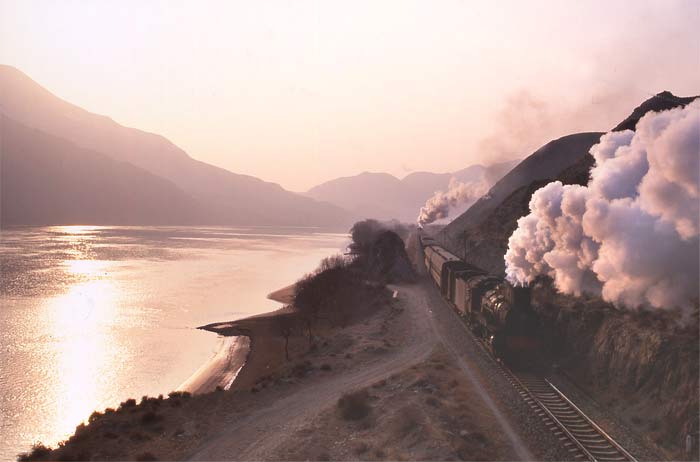 One of the last lines passing through the loess mountains is the industrial line at Baiyin. In part the line is surrounded by mountains and no industrial complex is visible. Beside freight trains, Baiyin offers passenger services. Uphill trains are quite spectacular, the crews are trashing the locos at the limit and sometimes freight trains even stall in the steepest part of the gradient. The terminus is a sight that will remind you of the 1970s, with housing blocks for the workers and huts made of bricks surrounding the station. Smog is very common in this industrial city, so we hope for a breeze to blow the pollution away. Anyhow, it is a very atmospheric place. 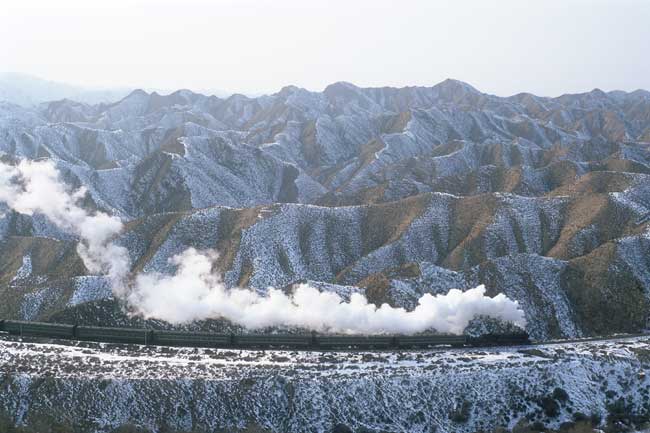 The steelworks of Baotou is using some two dozen steam locomotives of the SY class of 2-8-2s. Beside these there are many diesel locomotives. Of special interest are the blast furnace areas and the slag dump. The visit to one of the spectacular slag dumps is part of the program. As there are several of them you can never be sure you are waiting at the right place at the right time, but we will try to make things happen. Unfortunately the local police do not accept the permit that is issued by the steelworks, so it might be possible that we'll have to change the slag dump. However, we should still get our pictures! Access to the blast furnaces is permitted and far away from the local police as the huge furnaces are inside the steelworks. 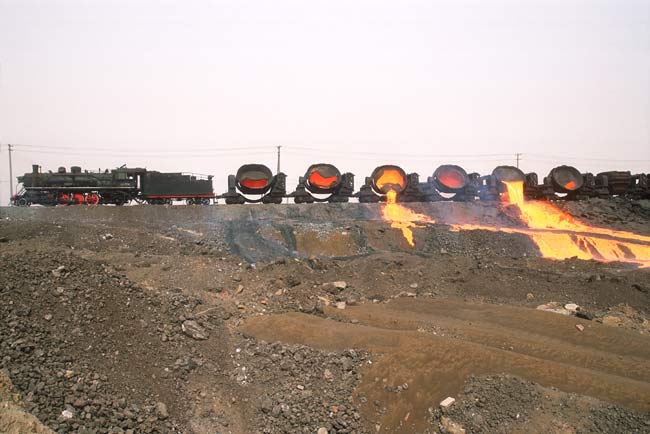 Some people may have problems with the thin air at high altitude locations. Lhasa, at an altitude of some 3,600 metres above sea level, normally causes only some minor problems while the Ganden monastery at more than 4,200 metres above sea level can be difficult for "lowlanders". Headaches are a common problem in this environment. You can't do much to prevent it. Just do not overestimate your personal constitution, walk slowly and drink sufficient water. After some days your body will acclimate to these circumstances. That's why we planned the visit to some of the high parts of the line on the last day.

Because of Tibet's recent history, there is a high military presence in the country. Therefore there are many restricted areas. The process of getting permits is slower than for other parts of China. At the moment it's not possible to guarantee that we can take pictures of the trains at every position planned. If necessary, we'll adjust the itinerary accordingly, but there will still be many good opportunities. 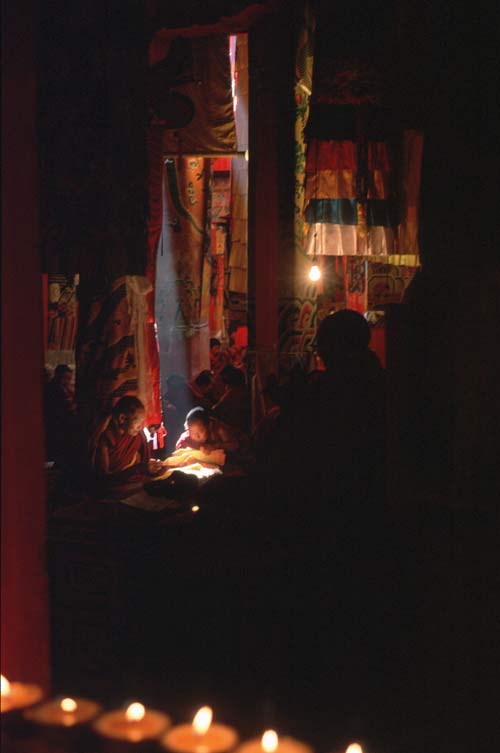 We have included some of the cultural highlights of Tibet. You may know that Tibet has been occupied by China since the 1950s, and Tibet's secretary of the Communist Party of China recently stated that they'll not rest until the death of the Dalai Lama. On the world stage, the political situation is contentious. This tour is made for railway enthusiasts and railway travellers who are anxious to see this amazing part of the world. It will give us all an opportunity to form our own insights into Tibet and its wonderful peoples. Protests or outspoken comments about the conquest of Tibet by rail, or other political issues, are inappropriate on the tour as we are guests in the country and will be in some restricted areas. If you feel it necessary to protest these issues, please do not book this tour in consideration of others.

We are staying in good hotels (usually four star standard, but on the steam extension good two and three star standard are the rule). However, to be able to take pictures around Amdo we need to accept the pretty basic conditions of the only available guesthouse. They do not offer a shower. The quality of the facilities is doubtful. For one night it should work, the night before and the next night we'll enjoy a four star hotel.

Hygienic and environmental standards in China often do no conform to European or North American expectations. Carrying some toiletries in your photo bag is hence advisable.

Hotels, charter buses and trains represent the standard of our host country, which may deviate from European and North American expectations. While we will endeavour to avoid long walks, although some photo positions may require an extra but worthwhile effort.

It might be possible that the narrow gauge line will pause and no trains will run during our visit, but if this does happen, we'll still have some interesting photo opportunities.

This tour is designed for dedicated photographers and video filmmakers as well as for people who like to travel by train. On occasions lunch will be served as a packed meal. Alcoholic beverages are not included in the tour price.

On this trip we'll cover huge distances. Beside the international flight we'll travel several 1,000 Kilometres in China. So carrying a good book with you might not be a bad idea.

Later registrations will be accepted if flights and hotels are still available. If you're not sure whether you can participate or not, please advise us of your interest well in advance so that we can hold your place.

The price for the steam extension doesn't include the international flight to Beijing.

Above prices are based on specific bookings with the respective airlines, which have to be confirmed well in advance. In times of oil prices which are hitting the sky, prices for air tickets are changing on a daily basis – and only in one direction. Your early booking is hence essential and much appreciated. 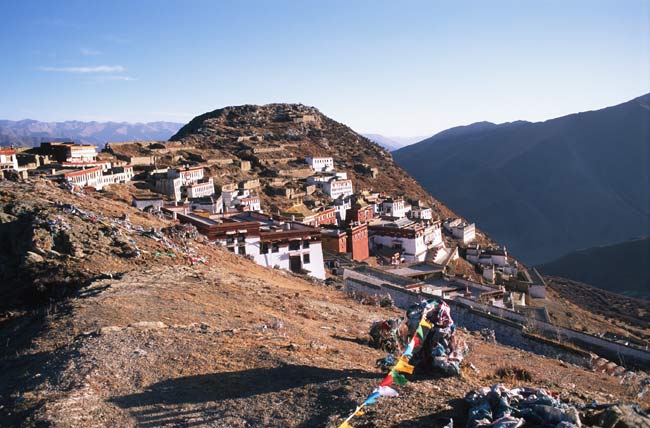