Steam on the Holy Line 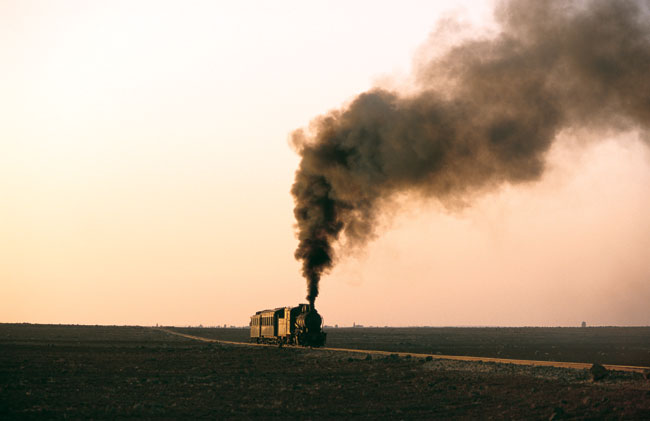 Beautiful locomotives from Stephenson, Borsig, Hartmann and others, some of them more than 100 years old, well-used ancient wagons and wooden coaches. A unique line with a unique gauge passing through desert and semi desert with beautiful stone and girder bridges and welcoming people who will make your stay in the Middle East remarkable, memorable and enjoyable.

Although the more than 100 years old Hedjaz Railway has lost its former importance, it hasn’t lost its fascination. Once it connected Damascus with Medina, but after large parts of the line were destroyed during World War One, only a few parts in Syria and Jordan are still operational. In Syria you can still find ancient wooden coaches behind German locos. But time is passing, even in the somewhat relaxed Middle East, the most scenic part in the Lebanon Mountains is buried under rocks and earth from landslides, the Swiss locomotives are not serviceable any more and isolated from the rest of the network and the link from Damascus Cadem to the main station is abandoned.

Our tour is unlike many others offered for rail photographers on the Hedjaz Railway. We’ll get up early in the morning to use the best morning light for photography instead of indulging in a substantial breakfast, we don’t care for luxury hotels far away from the railway which would require long bus rides each day, we’ll focus on authentic freight trains. We have planned a double header too, but only for a few miles. We prefer to offer authentic train compositions rather than two locomotives in front of three wagon trains. 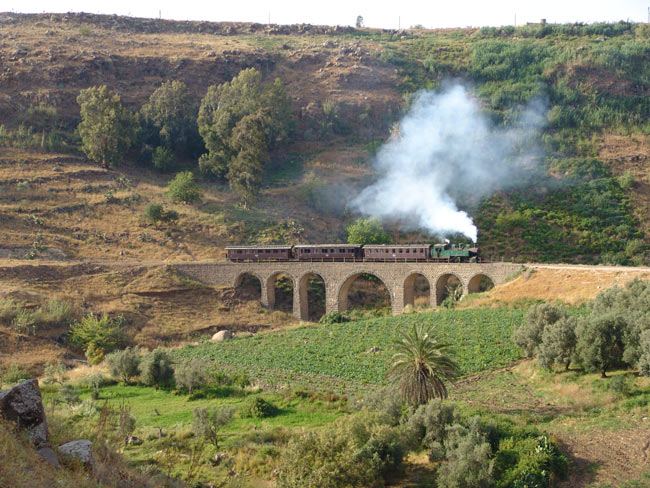 The following locomotives are probably serviceable:

Many years ago, in Syria the Hedjaz railway fell asleep. The spectacular line into the Lebanon Mountains which had frequently been used for special trains was blocked by several land slides. The line to the main station in the capital was lifted and the traffic on the remaining network was light. These days, a journey on the “holy” line starts in Damascus Cadem, where the main workshop of the Hedjaz railway in Syria is situated.

The line from Damascus to Deraa is mostly flat, but has to cross some photogenic wadis where gradients and beautiful stone bridges are common. We’ll delay our arrival in Deraa so we’ll be able to use the late afternoon and evening light for photography. On the other hand, in the middle of the day when the sun is at its highest we’ll not make many photo stops. The scheduled international freight train will be steam hauled and will get a seriously extended schedule to fit our plans for photo stops and runpasts. 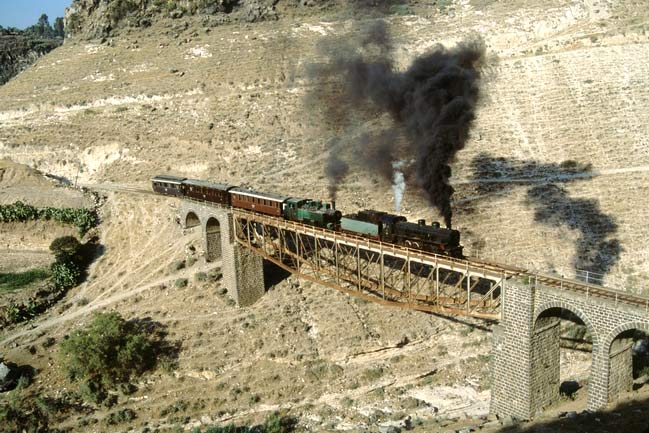 The line from Deraa to the west led to the Mediterranean Sea to the harbour city of Haifa. Only twelve kilometres remain usable. However, this short section is exceptionally beautiful. It is leads downhill to Zeizun. We’ll roll down and make the runpasts on the way back uphill to Deraa. Spectacular mountain scenery, a big steel girder bridge and an interesting stone viaduct offer plenty of photographic opportunities. The line leads in an east – west direction. There is no possibility of turning the locomotives. So we’ll push the train down and make only runpasts in the direction towards Deraa.

Our trip is planned to start early each morning. In the Middle Eastern mentality clocks seem to tick slower than in the west. For this reason we expect higher expenses for tips. But this is easily justified by the unique chance to get steam exhaust, which is only possible in the early morning, sometimes even not then. To increase our chances, we need to be in the right position when the sun touches the rails. This opportunity to see steam exhausts and to use the beautiful soft early morning light makes it worth to getting up earlier than most tourists would even consider. However, it gets dark early in the evening as well, so we have sufficient time for a good rest during the night.

We’ll travel twice on the Deraa – Zaizun section to use all the opportunities for great pictures. Our train compositions and the locomotives will be different on each occasion. 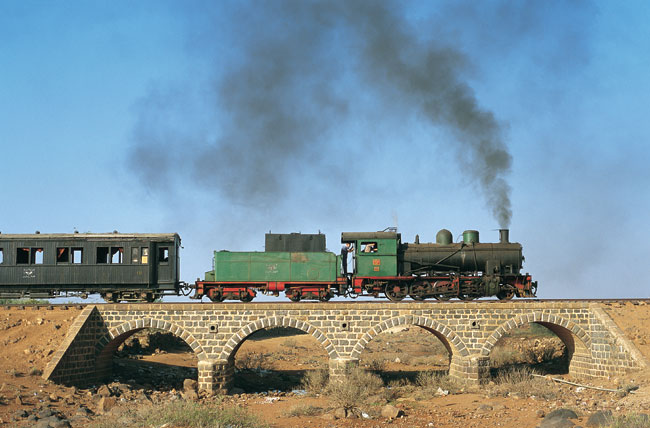 The line from Deraa to Bora leads mostly through flat and uninspiring stone desert. This is the reason we have chosen the late afternoon for travelling on this line. The setting sun will allow us to “play” with the light and to get some nice glint shots. The east – west direction of the railway line allows sunset shots as well. In Bosra we may take some night shots. However, there is almost no illumination in the station.

The most photogenic part of the line is in the suburbs and the city of Bosra. Therefore we’ve planned to push our train backwards on the line and return chimney first in the early morning light to Bosra.

There are almost no tempting positions on the line from Deraa southwards. so we’ll take a charter bus to cover the distance between Deraa in Syria and Az-Zarqa in Jordan. From Az-Zarqa to Damascus we’ll enjoy our first charter train in Jordan. There are several nice stone arch viaducts and some gradients.

From Amman we’ll follow the Hedjaz railway southwards. In the town of Amman can be found several good, almost famous positions, for instance the cemetery close to the line and a huge stone viaduct. In addition, the gradient of about two percent guarantees that we’ll experience hard working locomotives. Further on the line leads through the Jordan semi-desert, passing along several abandoned stations. On our 104 km long ride to Quartana we’ll cross several wadis, another chance for seeing these beautiful low stone viaducts.

We’ve planned several early departures to use the wonderful morning light. This has meant convincing the railway workers and the train staff that there is more time in a day than just the daylight hours. Despite all our efforts we are not able to guarantee that our schedule will not be subject to some delays. 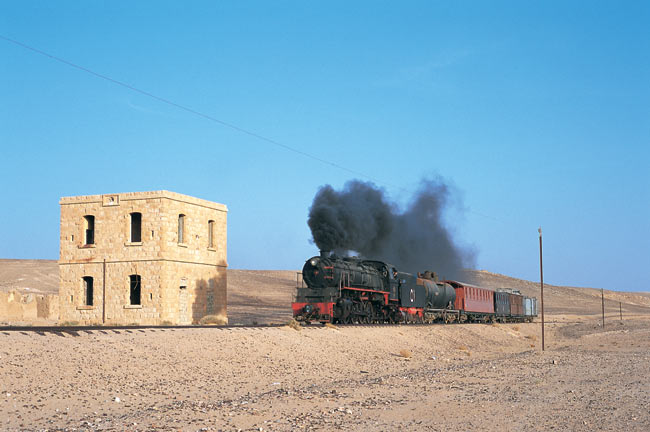 We’re travelling in Oriental countries with welcoming and kind people. This can get out of focus if you watch the daily news only. You’ll hardly find any sign of fundamental Islamism on our tour. Normal life is somewhat different from the attention chasing-news. Of course, as always, you should follow some rules, especially in Islamic countries. Please consider that the public opinion about everything coming from the United States of America is polluted by the recent political and especially military developments in the neighbour countries. For this reason you should leave at home any T-shirts showing the American flag. Because the television always shows pictures from the Intifada against Israel, the youth of Amman copy this behaviour and has become used to throwing stones at passing trains during darkness. Because of this most of the wagons will be missing at least some windows (which is not really important because of the average temperatures).

The youngest steam locomotives are more than fifty, the oldest over 100 years old. The wagons are rarely less than half a century on the rails as well. If you have ever seen the local methods of repairing rolling stock, you’ll easily understand that we cannot guarantee any particular locomotive. We’ll do our best to arrange always the most authentic train composition. According to the situation there can be changes from the planned locomotives and or train compositions. Time keeping can be influenced by technical failures, derailments and other incidents. So you should follow the rule of the desert and always carry sufficient water with you. 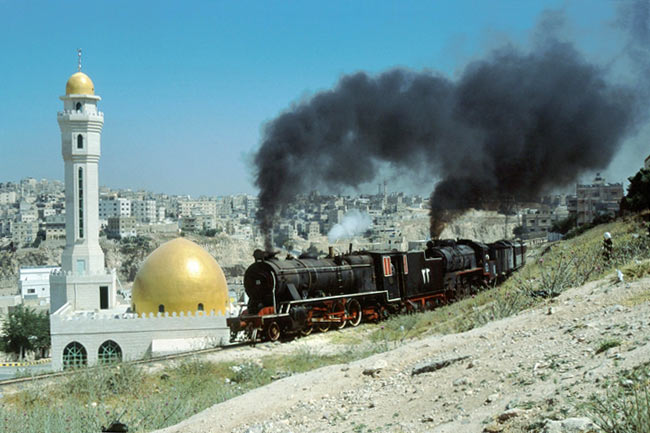 Temperatures often exceed 30 degrees Centigrade in the afternoon. During the night temperatures can easily drop down to 5 degrees Centigrade (40° F) only, so you need some warmer clothes as well. It doesn’t matter how warm it will be in the afternoon: short trousers are a no-no in Arabic countries. If you insist on wearing short trousers you can’t book the tour. This is a rule!

It’s not a good thing to make jokes about the different style of life or religion of other people. Normally children have to be tough to stand up to others. Even high ranking officials sometimes fall short in essential behaviour, so it’s essential to make one thing very clear, jokes and bad comments about the prophet, the religion or holy sites are not to be made, in public, at least.

We offer half board on the tour. In the case of an early start we need to arrange packed breakfasts. During the day we may have time for a lunch as well. On many days it is difficult to find a restaurant when we are in small towns, so it’s more likely that you’ll only have the chance to buy something from the market. The cost of a lunch is only a few Pounds, even in a restaurant.

We planned to attach two empty freight wagons to the scheduled freight train. In these two box cars we’ll put benches to offer a seat for everyone. There are no toilets or washing facilities in these freight cars, of course. In addition, there are no special steps or handles for boarding and disembarking. However, there is no big difference in leaving a passenger coach on the line or a freight car. We’ll provide a makeshift step to make it easier to get on and off the wagon. Please leave the wagon only if you feel physically able to get back on! The tour operators in Syria and Jordan as well as FarRail Tours will not be held responsible for an kind of incident or accident while using or travelling on our charter trains. Please bear in mind that accommodation and transportation in Syria and Jordan falls short of EU/US safety standards. Always use common sense when crossing roads and railway tracks. FarRail Tours cannot be held responsible and will not accept any liability whatsoever in the case of any accident or damage. We suggest you take out a comprehensive overseas accident and health insurance policy. 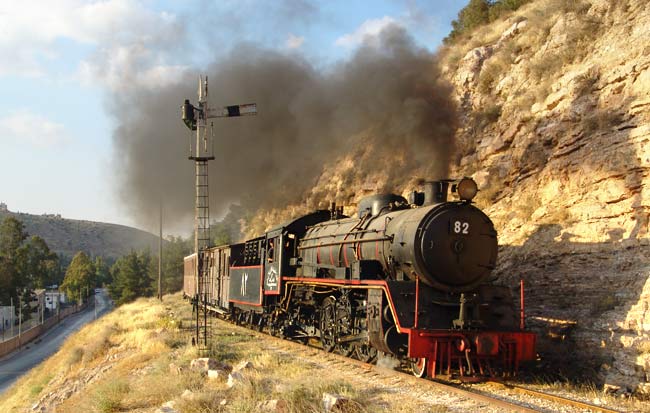 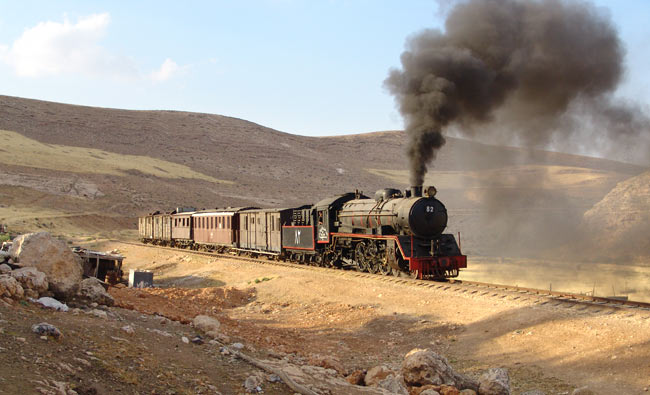 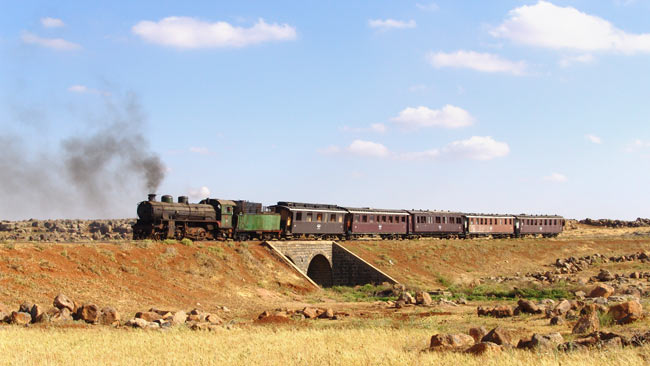 Your travel documents need to be free of Israeli stamps or visas. They should be valid more than six months after the intended end of the travel.

Changing money is easily possible at the border. Euros and British Pounds are welcomed in the Middle East. Travellers cheques are not recommended as we’ll have no time to cash them.

Because of political tensions it might be possible that we need to change our flight arrangements. At the moment the situation for tourists is relaxed. The peace keeping force in Lebanon is stabilising the region as well. Last but not least, we’ll visit the country a year before the next presidential elections in the USA and It’s unlikely that the current president will commence a new adventure leading into another disaster. So we’re looking forward to a peaceful time in Syria and Jordan.

Without flight (land only) you can deduct £290 from the tour price. 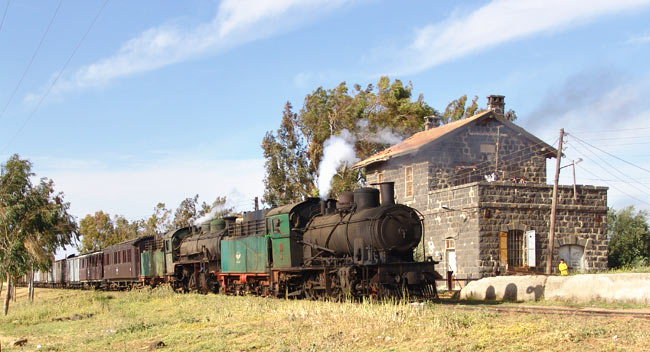 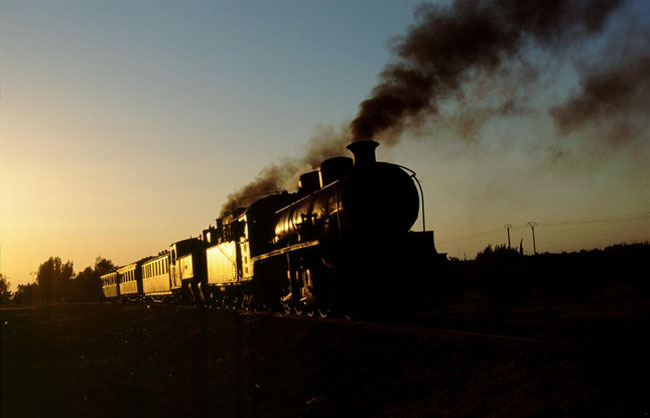