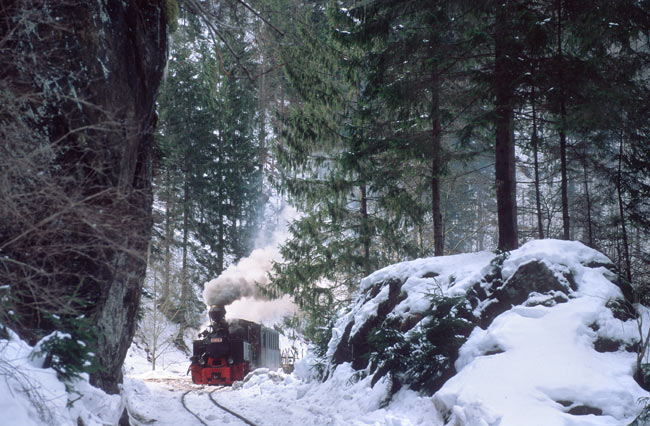 I remember two particular tours in winter to Romania; one in the “good old times” when, for instance, Berzasca and Finis were still running regularly and the German Mark was the currency, and another to Viseu de Sus in 2007. On both these trips we had much snow and much fun – but almost no sun! But it gets worse: on the last day of both tours, the day when we had to leave the country, the red ball came over the horizon and rose into a deep-blue sky. One time it was really frosty and the other time just below freezing point. On both occasions, it was beautiful winter weather, the best you can have for steam trains. What a pity that we weren't able to do even a single shot with a steam train. We had to head home. Third time lucky is a popular saying, so I'm hoping for the perfect combination of snow and sun in February 2016.

The pictures shown here are from winter 2007 – it can only be better! We've planned to visit two forestry lines in northern Romania, Viseu de Sus and Moldovita. If you want to book this tour you should be clear about the challenge of winter time in the Carpathians. The tour could easily fail due to bad weather conditions. Once I was in the Carpathians in April when it was impossible to pass through the snow by train ... In Viseu, the chances are very good that we will manage to run all the way up the mountains because the line is in daily use and, hence, is kept clear. But a flood in October could easily wash away the line, as has happened already twice this century. In Moldovita we'll need to see how many people we can afford, to clear the line by hand. It all depends on the depth of the winter and how large a group we are, but you should keep in mind that Moldovita may fail. There can be no guarantees, as usual. But if everything comes together as planned, it will be a fantastic opportunity to see and experience steam trains in winter.

We'll try to arrange our trains as authentically as possible – as always. 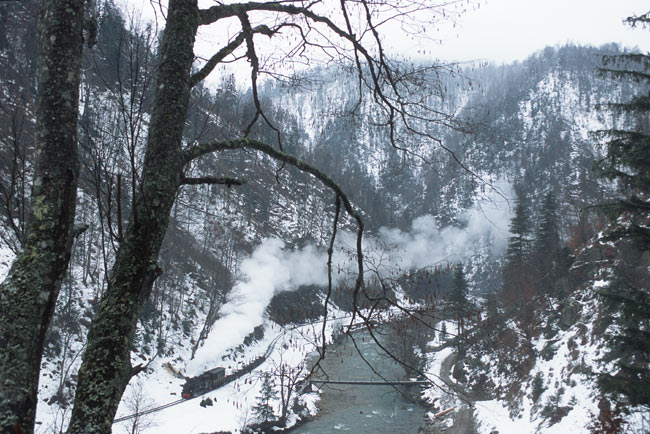 The narrow gauge forest railway of Viseu de Sus is the last remaining one in operation in Romania. Besides the diesels, steam locomotives are still serviceable, mostly the Resita built 0-8-0T or their Reghin built counterparts. Besides these, two more interesting steam locomotives are in running condition. One of them is the 0-8-0 Orenstein & Koppel built tank locomotive, 764 211. Steam is not used on a regular basis any more but is still used for tourist trains. 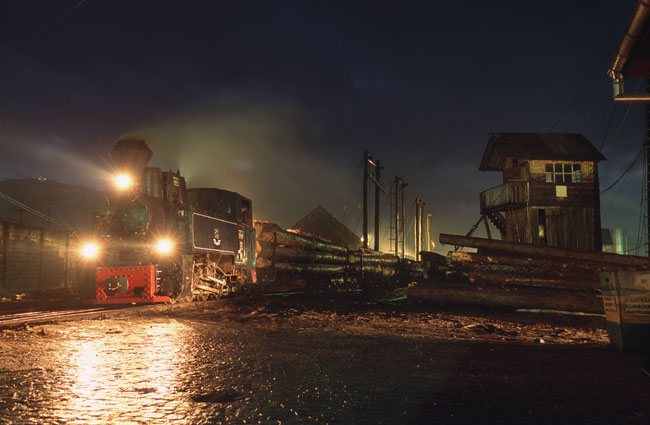 The main line starts in Viseu de Sus at the large sawmill and runs steadily uphill for 43 km to Coman at the Ukrainian border. There was also a branch line to the east, into the Novat valley, of which only a small part is still usable. Both lines offer plenty of opportunities for good pictures. On the main line there are three tunnels very close together.

Not only is the landscape something special, the trains in themselves are also noteworthy. We will try to make up authentic trains, as they ran in the eighties, when the line belonged to the state run forestry railway CFF (Caile Ferate Forestiere) and when it was worked by steam locomotives exclusively. In 2014, only two conventional working passenger coaches remained in working order, both painted in a bluish green. Besides locomotive, tender and passenger coach, we’ll carry several empty trucks for the logs uphill to the loading points. Sometimes there are forestry tractors or other machinery that have to be brought up into the forest. This equipment is carried by the railway as well. We don’t have a direct influence on the train dispatching but our chances of getting an authentic train behind the locomotive are quite good. Wednesday day we’ll take what’s available, which has been in most cases on our previous trips, authentic as well. 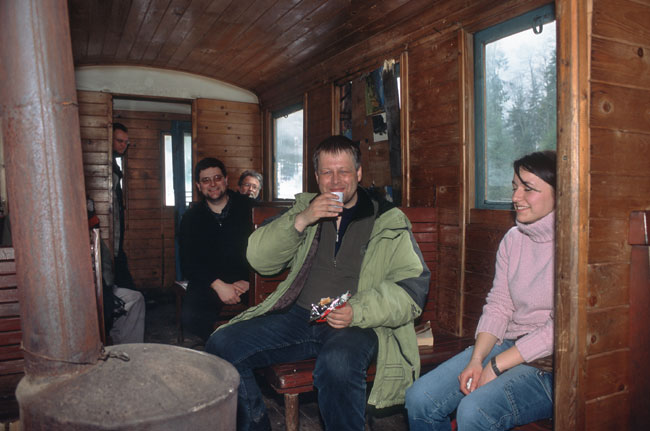 At the intermediate stations, during unplanned stops (to raise steam pressure or get one of the log bogies on the track again) and stops for taking on water, we will have the opportunity to take pictures of the train and its surroundings. Lots of shunting activity can be seen as they leave the log bogies at the loading points. In addition we’ve planned some runpasts along the line.

But remember, everything about the tour is unpredictable. Please expect delays, shortages of wagons and couplings for the wagons, derailments, inaccurate or no information and so on. We’ll try to sort all these things out in advance but experience tells us to expect the unexpected. However things usually work out in a very satisfactory way. So it will be the same as on our previous trips: we’ll need to arrange things on the spot, try to get the wagons we want and find the best opportunities together with the local railway staff, who will be as helpful as they can be.

Moldovita was a really nice forestry line. In its last years of operation they used a Resita (764 449) and the 0-6-0 inside frame 763 193 locomotive from Krauss/Munich. The small engine was not only the main attraction of the line, it also was amazing what this little, 50 hp engine was able to pull and push uphill over the steep gradients of this line. It’s a little miracle that this unique engine survived and is still “steamable” (unable to haul trains, however). We’ll not bring the loco to Moldovita. The forestry line was closed and abandoned under doubtful conditions. However, because of a few railway enthusiasts, in particular Georg Hocevar, the remains were preserved and, with the help of other railway enthusiasts, a part of the lower section of the line was refurbished. The length of the line was reduced to two kilometres just before they started to save and preserve it. Now they have rebuilt the first eleven kilometres. 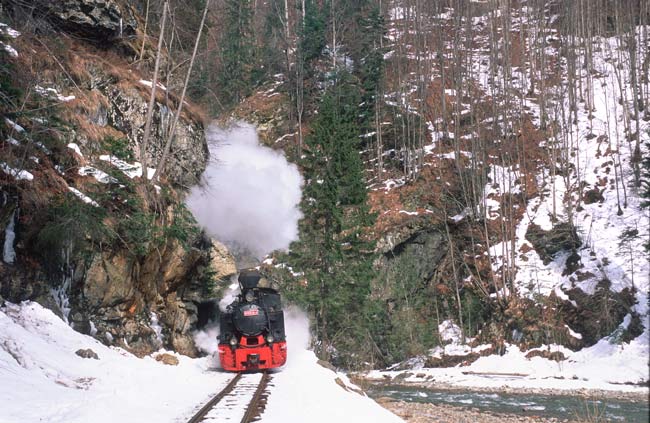 We’ll make a visit to the depot where our loco will be fired. Along the line we’ll pass several old-style wooden houses. The parallel road has been partly paved in recent years. We wanted to transfer the Krauss loco 763 193 to the line, but it’s not usable for hauling trains and due to political resistance impossible. There are fears that it would be impossible to re-transfer the loco back to Viseu after we’ve used it for our charter train. So we’ll use an authentic Resita loco in Moldovita.

Romania is a new member of the European Union. This has brought a lot of change to the country but in the small villages along the lines we can still experience the traditional Romania and its hospitality. Serious crime is almost unheard of; our accommodations are either family run or nice basic lower to middle class hotels and all offer a warm shower and reasonable, good food. The night spent in the mountains is in basic accommodation, which is quite clean with basic cold washing facilities. It’s not certain that the lavatories in the building will be operable, so we may need to use the outside lavatories. We’ll stay in big, simple rooms. There are no single or double rooms available for this night. It’s likely that this accommodation will not offer electricity (however, last time they did offer electricity). Please carry sufficient spare batteries with you.

The use of a specific locomotive cannot be promised on any line we’ll visit. In Viseu we'll use steam engines for the regular trains depending on their availability. We don’t know which steam locomotives will be operational. The engines built by Resita and Reghin seem to be almost “indestructible”, so the local workshop should be able to solve any problems. Because of the high costs of bringing the locomotives to Moldovita there is almost certainly no refund possible if something goes wrong and steam operation can’t be delivered. 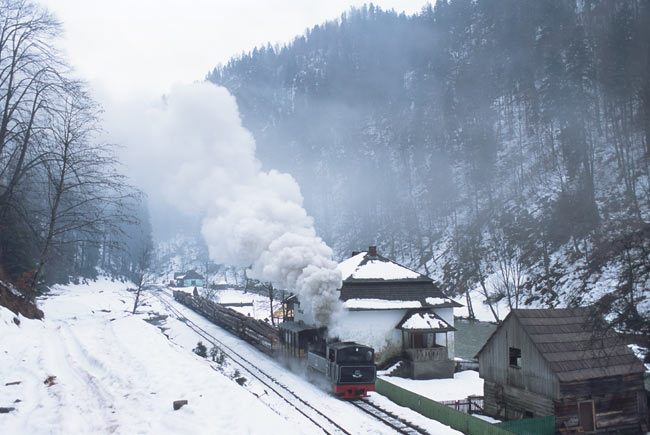 In our pensions and hotels there is a sufficient power supply for the charging of batteries. However, in our accommodation in the mountains there may well be no power supply. In addition, there is no cell phone signal in the forests (luckily).

Health: no problems exist concerning your health. The water from the numerous springs along the line in Viseu can be drunk without a problem, even the small streams just above the first village have clear and drinkable water. The only serious health risk is if you are not careful around an operating railway. Jumping up or down from moving trains is not allowed in Viseu de Sus. Getting on or off, and travelling on the train is at your own risk, so take care along the railway. Wear good sturdy shoes, suitable for the possibility of snow. 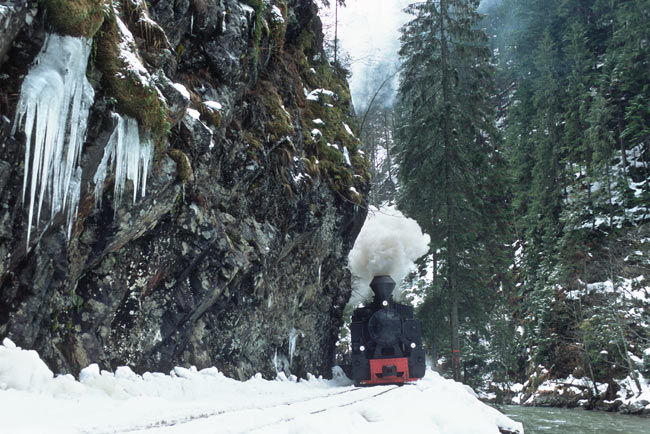 For this tour you will need a valid passport, EU citizens only a valid ID card. A visa for citizens of the European Union is not necessary. For citizens of other countries please contact your local Romanian Embassy for details.

You’ll need little money in local currency. Food, some of which is not included, and beverages are quite cheap.

The tour is planned with the dedicated photographer and video filmmaker in mind. The itinerary is designed for those who think it more important to get the perfect shot than to sample the local food, bars or nightclubs.

Please remember that the accommodation, buses and the forest railway itself do not necessarily conform to current EU-standards. That’s exactly one of the reasons why we are going there. Safety and environmental standards are still not fully developed so a word of warning: Please beware of the dangers in and around the railway and other modes of transportation. An accident and health insurance policy covering foreign countries is absolutely essential. FarRail Tours cannot be held responsible for any accidents, delays etc. 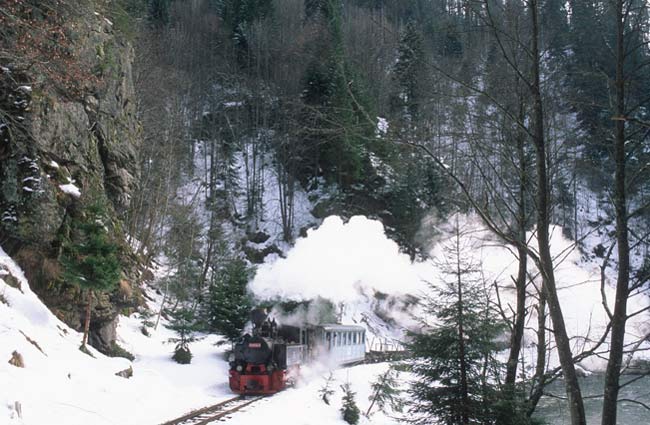 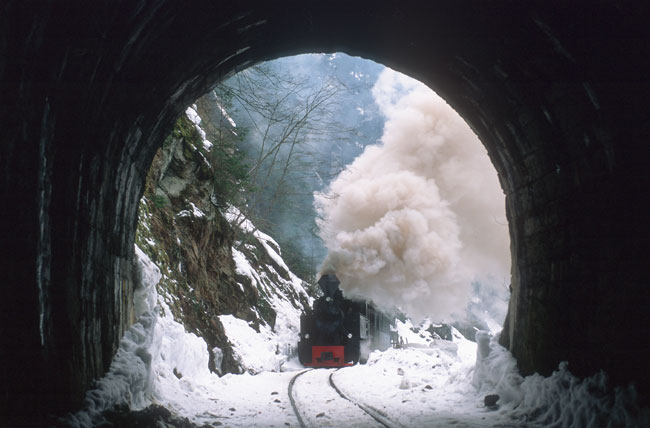