Lambs and Logging in the Mountains:
Carpathian Narrow Gauge Steam 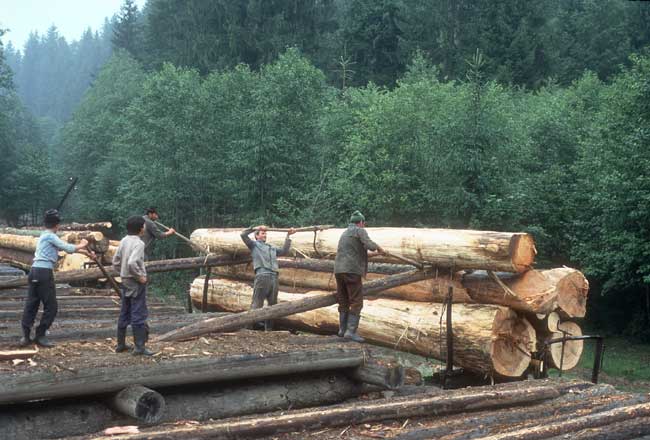 This tour is a special event which is not only focussed on the railway and their steam trains. We’ll see a lot more than just steam trains!

Yes, they still exist, narrow gauge logging railways in Europe, but just one still uses steam locomotives to haul wood from the forests to the mill: Viseu de Sus in Romania.

Normally diesel locomotives are used and the steam locomotives only provide a fallback alternative but, with a little help, a steam loco can be substituted on the regular logging train. For several days in Spring we’ll bring back the steam engine to the forests and valleys of Viseu de Sus and its logging lines. By using one of the diesel railcars we will be able to chase the trains and maximise our efforts to get good pictures along the way, on otherwise inaccessible parts of the railway.

In the last week of May and the first week of June they usually take flocks of sheep and some working horses to the mountains – by rail. The animals will stay there over the summer and will be brought back in early autumn. We want to head one of these trains by steam.

Another feature of this trip will be a night in the mountains. We’ll visit a forestry log cabin and go to where they cut the timber. The logs will be brought to the railway by horses and probably loaded by hand. This is no longer the usual operation, but it was decades ago. So our focus is not only on the line and the steam trains, but also we’ll take videos and photographs of the logging activities from the forest to the sawmills, including a visit to the impressive unloading yard in Viseu.

As all the equipment at Viseu de Sus runs with almost no regular maintenance, the use of a particular steam locomotive cannot be guaranteed. But we can count on the talent and improvisation of the local crew, and we hope to be able to see all engines running. 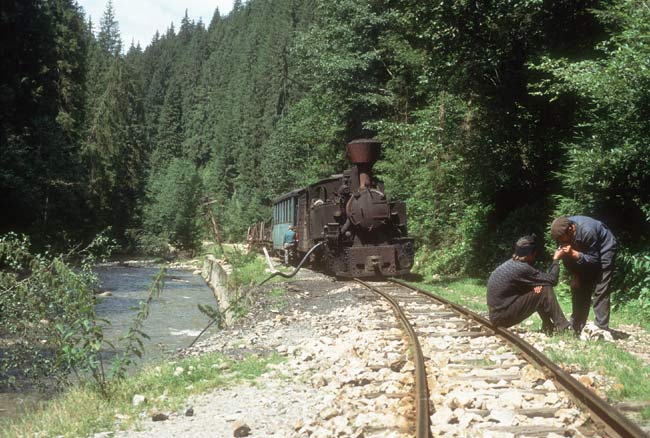 We chose the first week of June for our trip not only because the sun will shine longer and reach normally dark parts of the valley but also because this is the time when there is no frost any more in the mountains and the animals are taken up to the meadows. They often use the railway for this job. This is something unusual these days and is well worth capturing on film or tape. In addition we’ll visit a place where the logs are coming from. This requires some walking through the forest or recently deforested areas. At this time it is not possible to say where this will be or how far we need to walk to get to the logging site. Just be prepared for a walk of perhaps up to three miles. 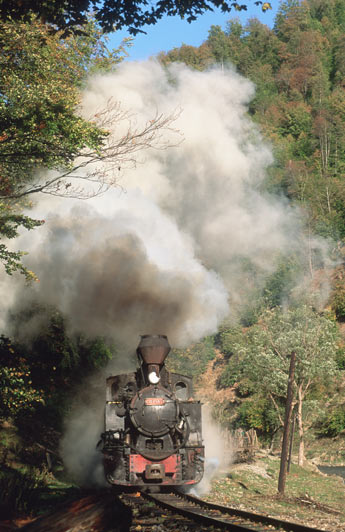 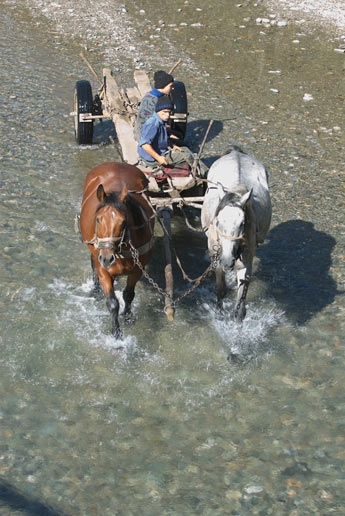 The narrow gauge forest railway of Viseu de Sus is the last remaining one in Romania. Besides diesel engines, steam locomotives are still employed, mostly the Resita-build 0-8-0T or their Reghin-build counterparts. Besides them two more interesting steam locomotives are in running condition. One of them was the 0-8-0 Orenstein & Koppel-built tank locomotive 764 211 and the other is 763 193, an 0-6-0 tank engine with an inside frame build by Krauss in Munich. It came to Viseu de Sus from the forest railway at Moldovita after it closed. Steam is not used on a regular basis any more, but occasionally there are steam operated trains on the shorter line towards Poiana Novat. We’ll replace diesel by steam on some of the trains.

Everything about the tour is unpredictable. Please expect delays, shortage of wagons and couplings for the wagons, derailments, inaccurate information and so on. We try to sort all these things out in advance, but experience tells us to expect nothing to be ready as we have asked. So it will be the same as on our last trip, we’ll need to arrange things on the spot, try to get the wagons we want and find the best opportunities together with the local railway staff. 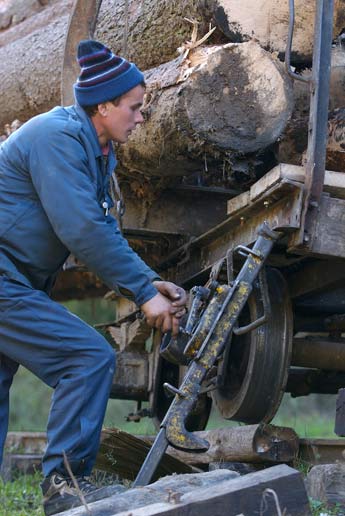 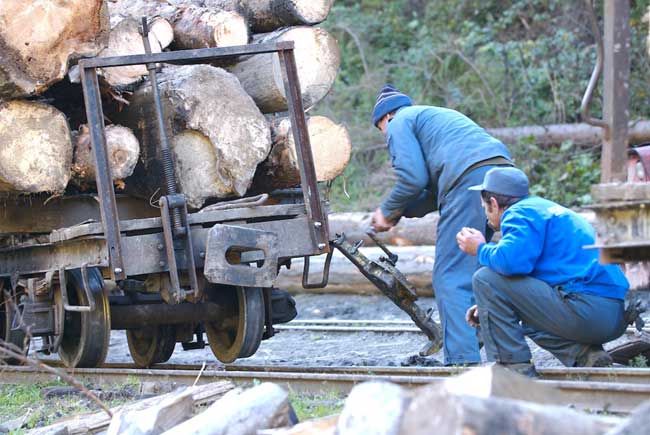 The main line starts in Viseu de Sus at the sawmill and runs steadily uphill for 43 km to Coman at the Ukrainian border. There is also a branch line to the east into the Novat valley. Both lines offer plenty of opportunities for good pictures. On the main line there are, for example, three tunnels just after one another.

Not only is the landscape something special, the trains in themselves are also noteworthy. We will try to make up authentic trains, as they ran in the eighties, when the line belonged to the state run forestry railway CFF (Caile Ferate Forestiere) and was worked by steam locomotives exclusively. In Winter 2007 only three conventional working passenger coaches existed, with two of them painted blue and one yellow. 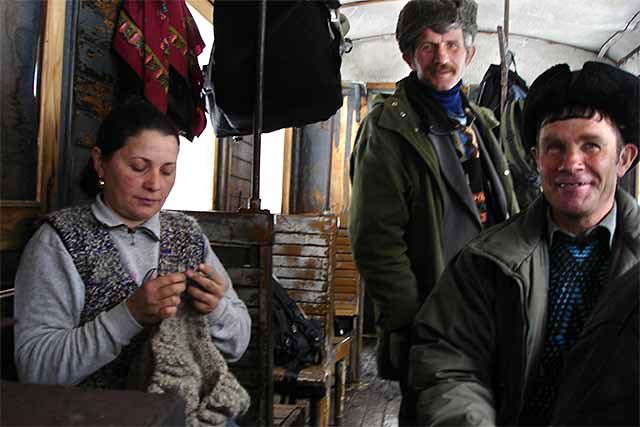 During our visit the tourist season is in full swing. This means that there is a daily tourist train to Faina, hauled by steam. This train is not really photogenic as they usually use the yellow passenger coach as well as some open top tourist coaches, in yellow livery too. We try to avoid this train as much as possible.

At the intermediate stations, with unplanned stops (to raise steam pressure or get one of the log bogies on the right track again) and stops for taking on water, we will have the opportunity to take pictures of the train and its surroundings. Lots of shunting activities can be seen as they leave the log bogies at the loading points. In addition we’ve planned some runpasts along the line. 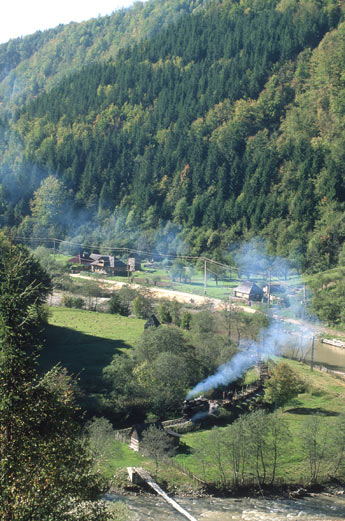 On one of the following days we may charter the diesel railcar With the help of the railcar we’ll follow the steam powered train. As there are lots of stops along the line, we can use it to get ahead of the train to a good photo stop and wait there for the train to pass. Afterwards, the railcar will pick us up and soon the steam train will be in sight again. This is possible as on the forest railway the minimum distance between trains is governed by sight not by signals. The big advantage of the otherwise rather expensive railcar is that the train doesn’t have to stop for us. Stopping the train would delay the journey to such an extent that the return of the loaded logging train would probably be in the dark. Besides that, it is more realistic for all of you taking video shots to have the train disappear into woods rather than have it stop right beside you. After the train, with its sounds and sights, has passed, there is still time to listen to the quiet sounds of the small river nearby and the faint whistle of the train. The use of the railcar has its advantages also for the photographers. We will have more time to get to the photo spots far away from the tracks (we will be able to get to many more locations than just those at trackside as compared to the time we would have if we were travelling on the train). This is why we chose this more expensive, but by far the most efficient method, of chasing the train. 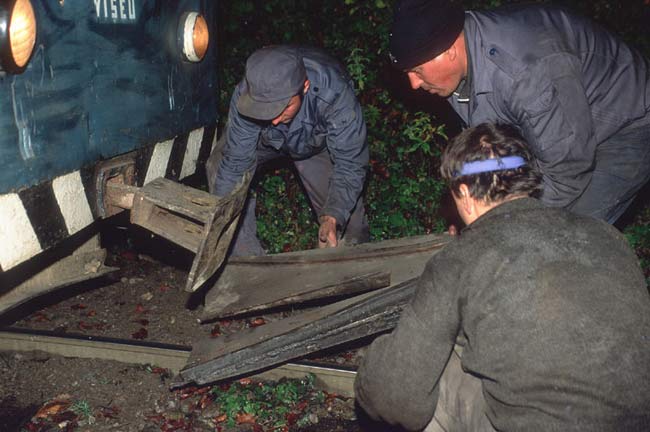 Romania is a new member in the European Union. This has brought a lot of change to the country. But in the small villages along the line we can still experience the traditional Romania and its hospitality. Serious crime is almost unheard of; our accommodation is family run and has warm showers and good food. The night spent in the mountains is in basic accommodation which is clean with basic cold washing facilities.

The use of a specific engine cannot be promised. We will use steam engines for the regular trains depending on their availability. As the company is running the engines and the rest of the rolling stock without proper maintenance, we don’t know if in Spring 2008 there will still be four operational steam engines, as was the case in winter 2007. If none of them is in working condition, we reserve the right to cancel the tour at short notice. But this situation, we feel, is rather unlikely and we’ll do our best to keep the tour running as planned. The engines build by Resita and Reghin seem to be almost “indestructible”, so the local workshop should be able to solve any problems.

On this tour we have planned several events which can’t be guaranteed in any respect. Neither the horses nor the manual loading process, the number of wagons, the locomotive or the flocks of sheep can be guaranteed. So this is a special tour, a private tour where you can come along and just see what happens.

There are sufficient power supplies for charging batteries. Electric power can’t be guaranteed on our night in the mountains. There is no cell phone signal in the forests (luckily). 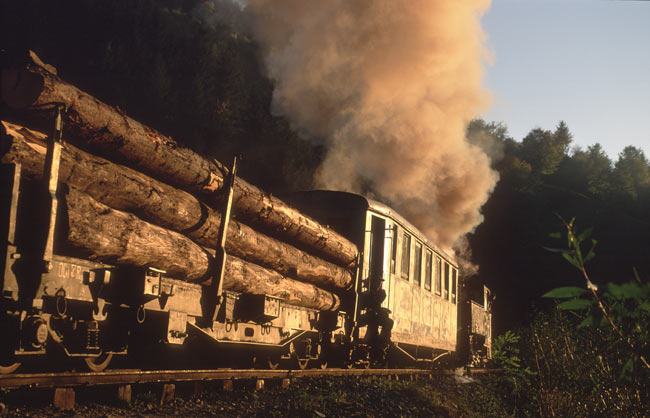 Health: no problems exist concerning your health. The water from the numerous springs along the line can be drunk without a problem, even the small streams just above the first village have clear and drinkable water. The only serious health risk is if you are not careful around this operating railroad. Jumping up or down from moving trains is not allowed in Viseu de Sus. Getting on or off, and travelling on the train is at your own risk, so take care along the railway.

For this tour you will need a valid passport. A visa for citizens of the European Union is not necessary. For citizens of other countries please ask the local Romanian embassy for details.

Prices: a simple warm meal will cost you £2 and even an opulent dinner with several courses won’t cost more than £12.

The tour is planned with the dedicated photographer and video filmmaker in mind. The itinerary is designed for those who think it more important to get the perfect shot, not necessarily to sample the local food, bars or nightclubs.

Please remember that the hotels, buses and the forest railway itself do not necessarily conform to current EU-standards. That’s exactly one of the reasons why we are going there. Safety and environmental standards are still not fully developed so a word of warning: Please beware of the dangers in and around the railway and other modes of transportation. An accident and health insurance policy covering foreign countries is absolutely essential. FarRail Tours cannot be held responsible for any accidents. 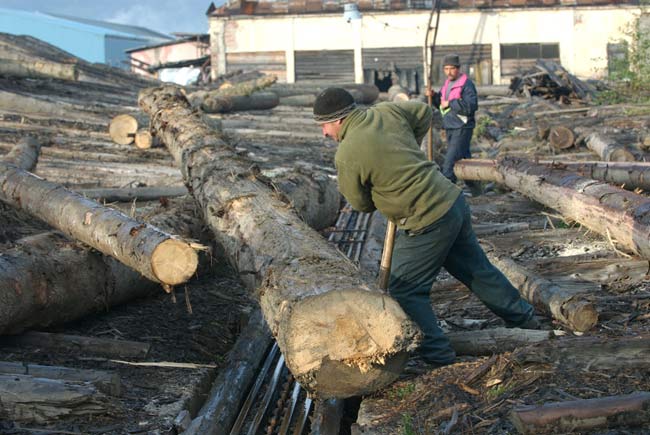