Taiga Drums at the Bumbat-Pass 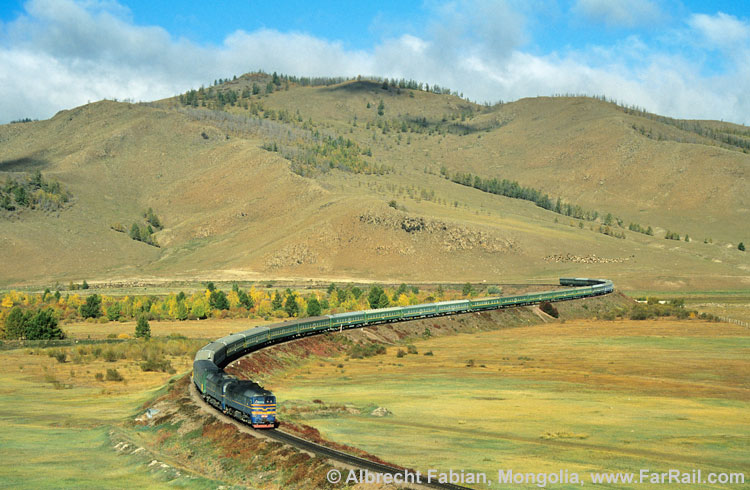 They do exist - pictures of the Mongolian railway. Trans-Siberian Express travellers take them on the way from Moscow to Beijing as a view from the train window or from the platform in Ulaan Baatar main station. Rarely, though, is Mongolia itself the main interest for railway enthusiasts and wrongfully so. The Mongolian Railways feature a number of interesting subjects and the Mongolian people and landscapes are fascinating in themselves. What else goes on in this supposedly secluded part of our world?

Our main interest is the diesel locomotives and it’s no secret. This Central Asian country has developed into the absolute “El Dorado” for enthusiasts of the “Taiga Drum”, the M62 class. There remain many originally delivered, acquired second hand or rebuilt locos in service. There is one irrefutable fact:

There is no country in the world outside Russia which has such a variety of members of the M62 family! 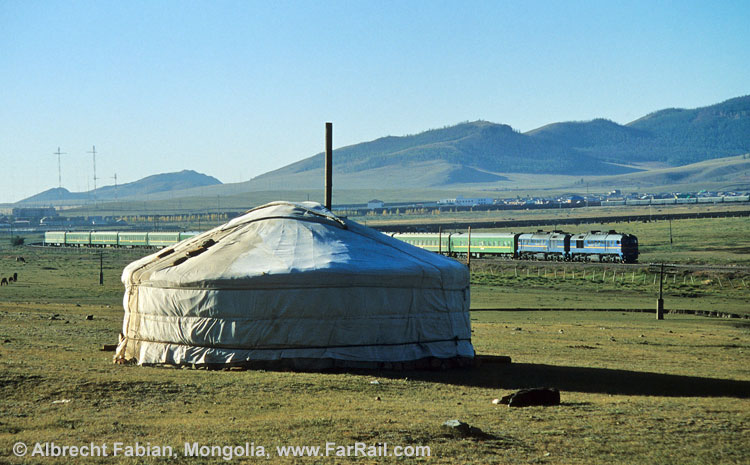 First a look at the double-section locos:

and now the single units:

Further varieties are possible, all M62UM are still awaiting rebuilding.

In contrast to M62-types in other countries all Mongolian locos have the high “Mongolian Smokestack”. 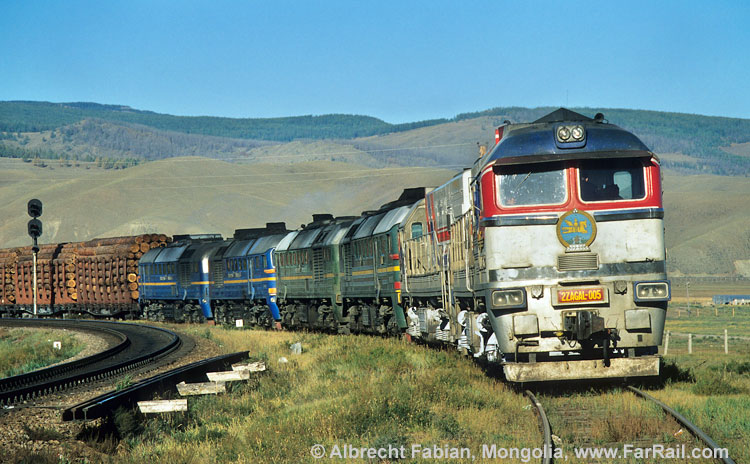 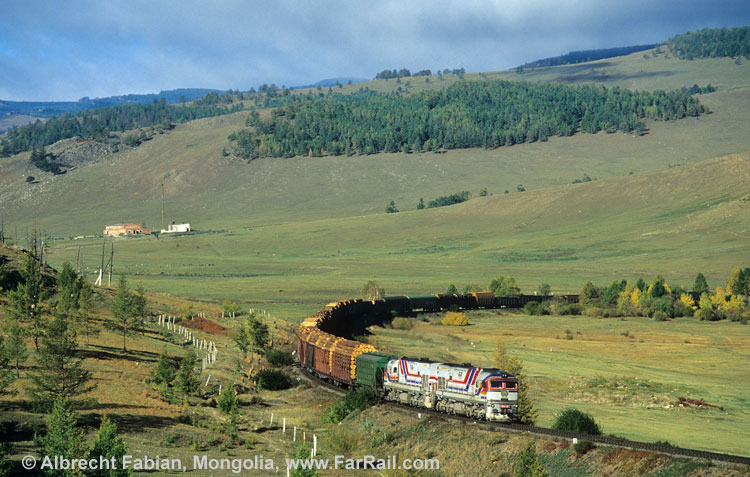 Details about the Tour

Mongolia, a large and wide country with low settlement, has developed a special kind of tourist infrastructure. Hotels exist only in bigger cities but they are normally professionally managed. Not all hotels offer Western European standards (with toilets and washing facilities inside the rooms). Normal accommodation near to tourist highlights in the countryside is in tourist camps in which the customers stay in authentic Mongolian tent houses. An overnight stay in such conditions has its own charm but the sanitary facilities are simple and single rooms often impossible.

The sleeping cars in the regular trains have only four-bed-compartments.

Most Mongolians in the countryside are well known for their unreserved and hearty hospitality and don’t know words such as theft or robbery. However Ulaanbaatar, like every other big city, has its social problems and its own special criminality. Petty crime such as theft or pick pocketing is no worse than in European countries. Nevertheless, you would be well advised to keep a close eye on your photo equipment and your baggage. 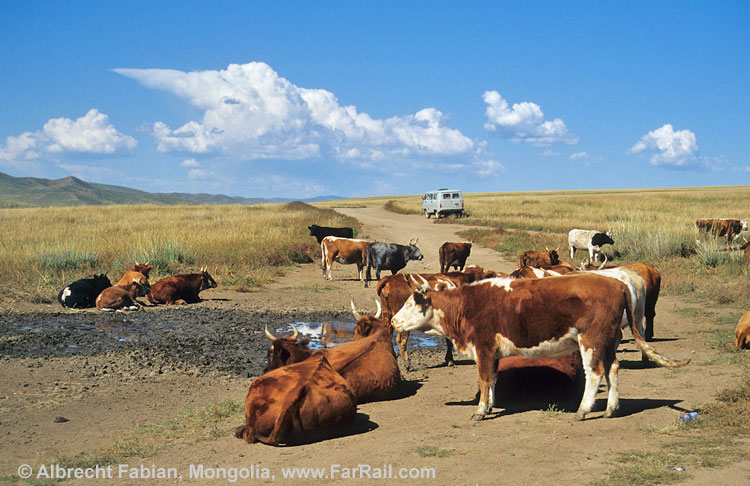 Mongolia has an extremely continental climate with warm and wet summers and very bleak winters. At the time of our journey the rainy summer has already finished. The weather can change very quickly from summer heat to snowfall. Sometimes we’ll reach locations by climbing cattle fences or wading through small brooks. Please organise your clothing according to these requirements.

The road conditions in Mongolia cannot be compared to Europe. Only a small number of international roads are paved. Riding the gravel or earth roads with our mini buses feels like an “off-road-experience”. That’s why our journey is only suitable for people in a good state of health.

Photographing railways is mainly unknown in Mongolia but doesn’t cause problems when taken from public places. Railway workers like the taking of pictures as it shows interest in their work. FarRail Tours found during the preparation this journey general goodwill from the MTZ, the Mongolian State Railway. However, it’s impossible to get a formal written permit for visiting loco depots. Traditionally the executive staff set great store by welcoming and guiding guests themselves. Not always, though, can the appointment book of the depot director be co-ordinated with our journey schedule. That’s why we can’t give a general guarantee for depot visits.

The journey is arranged on a full-board basis but please note that on a few occasions, depending on train movements and secluded locations, we may not have time or the opportunity for regular meal breaks. That’s why some meals, usually breakfast or lunch, may be given as packed boxes. During bus rides we’ll serve a cup of tea or coffee. It’s a good idea to bring your own cup with you. 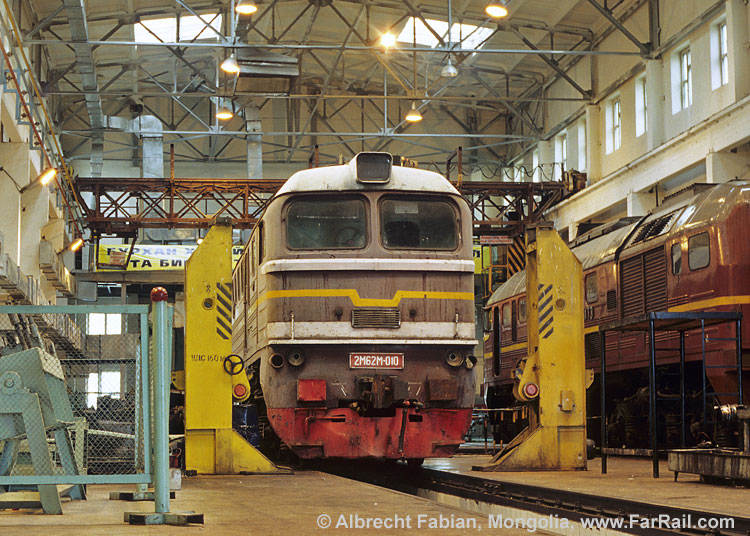 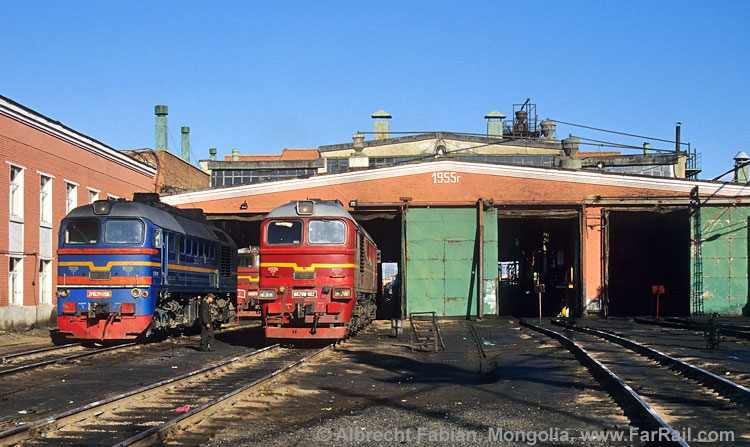 Paying with credit cards in restaurants and shops is not widespread. Cashing traveller cheques is generally possible in a bank but it costs a lot of time which we don’t have on this trip. The best way to proceed is by changing notes (Euro, Pound Sterling, US-Dollar). Money exchanges exist in Ulaanbaatar and other cities.

Electricity (220V, 50 Hz) is available in all our hotels. Usually, but not always, the Mongolians use the normal European standard. To be sure, it’s better that you take a multiple-system adapter for the sockets. Because it is senseless to arrange a telephone cable network in the wide and deserted country the Mongolians operate a well organised mobile phone network. Mobile coverage is good in all areas where people are living. Please take care as you will have to pay roaming costs for incoming phone calls as well as outgoing.

Visa formalities have changed often in the past. Generally, entry to Mongolia requires a minimum 6 month valid passport with a complete free side for the visa. Together with a passport photo you must apply for a visa at the Mongolian Embassy in your own country. The application form can be sent by FarRail Tours if you ask. FarRail Tours will also supply a certified invitation or hotel reservation for an extra charge if it is necessary. In the past (and also at present) it’s possible to get a visa when arriving in Ulaanbaatar airport. However, the Russian airline Aeroflot can refuse the flight if you don’t have a visa for your destination country.

Travellers to Mongolia should have an acceptable health insurance. Please ask your insurance company if your police is valid in Mongolia.

We must warn you of the risks with railway traffic. A high visibility vest must an obligatory part of your luggage. Recommended for all people is an accident insurance because FarRail Tours and partners cannot accept liability for injuries. 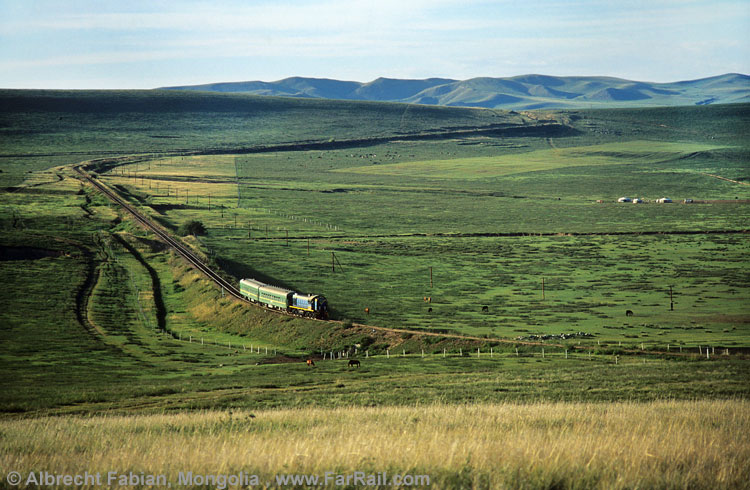 Single room available only in hotels 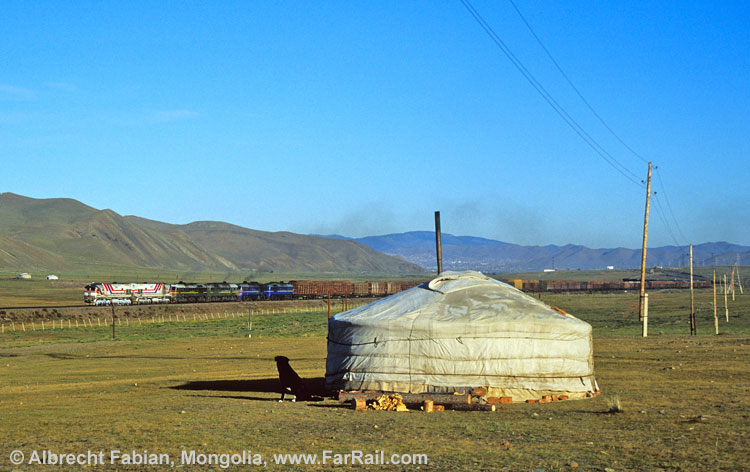