Steam in the Mountains - Compact Event 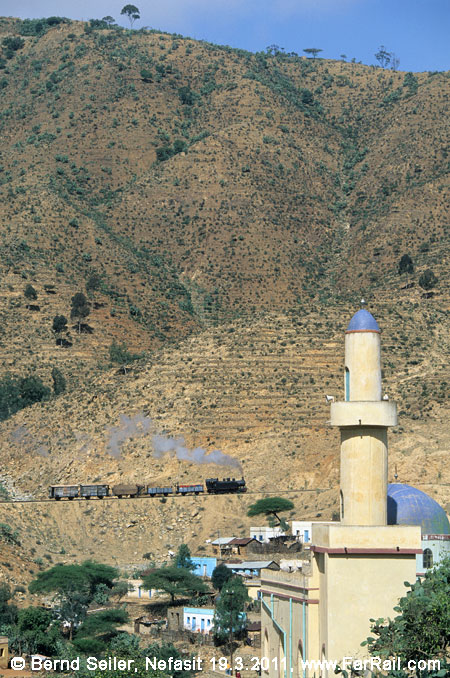 Eritrea’s history and its phenomenal railway not only attract railway enthusiasts, they also create dreams for film producers. An innovative, young film producer has developed an interesting concept for a documentary in which Eritrea’s railway will play a major part. She has already produced an award winning film in which an African train was the recurrent theme. An award winning film doesn’t necessarily mean that you have money for your next production and so she needs to start from scratch to get funding for her new project. And this is the crux: to raise funds for a film project you need to write a script and have a trailer. The production of such a trailer can only be financed using her personal money – something extremely difficult for young film makers. Chartering a train is definitely beyond her budget and this is the point where we come into the game. After several discussions with the producers, I came to a point where I said I can support you. The film doesn’t have to share our photo positions, they’ll not influence our schedule or require any extra time for their production. For the film they’ll need sequences uninteresting for us – unless you want to get up at 1.30am to see the fire lit in the locomotive at 2 am? So they won’t be in our way, but they could participate in the advantages a train operation would bring for their film project. Therefore I’ve decided to add a tour to our calendar with very short notice in advance. This time we’ll not have any new innovations on our tour – except a very small one. But this will be a surprise, as usual.

As we’ve encouraged them to overhaul several two axle freight cars over the last two years, it’s now possible to offer a large variety of genuinely authentic looking trains. We’ll not offer ghost trains which look dead and the higher costs of arranging this are included in the tour price. This little extra effort will make all the difference for good pictures! Although we’ll spend only a few days there, rest assured that we’ll offer many good opportunities for exciting photos and videos.

In addition to the railway programme, we’ll do something which is really rarely on offer: we’ll visit the Monday-only camel market in Keren. At this market it’s sometimes hard to tell whether you’ve used a time machine to go back to an Arabic market of the middle ages or you’re living in 2012. While we’re in Keren we’ll also pay a visit to the reasonably well kept station buildings of Keren.

The tour will be good for Eritrea “newcomers” as well as regular visitors who want to use their remaining leave for 2011. Our programme is very compact and offers only the “cherry of the cake” of the Eritrean’s railway, but we’ll use all three different types of locomotive and will probably see the “new” 442 56 in steam. This loco has been under overhaul for many years, as we’ve reported. It should be able to haul trains over the stiff gradients by the time we’re there. 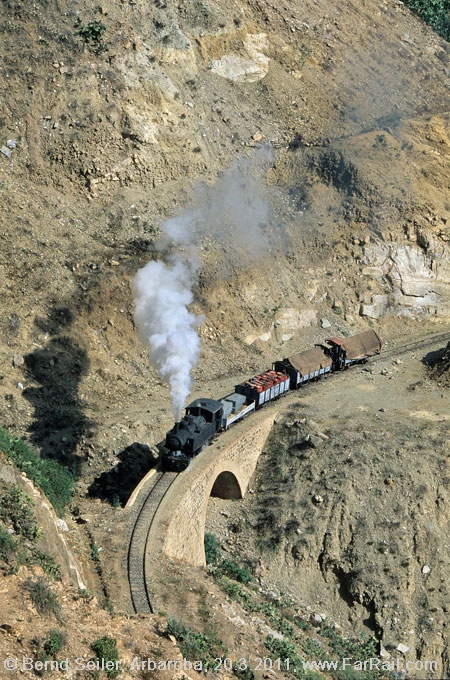 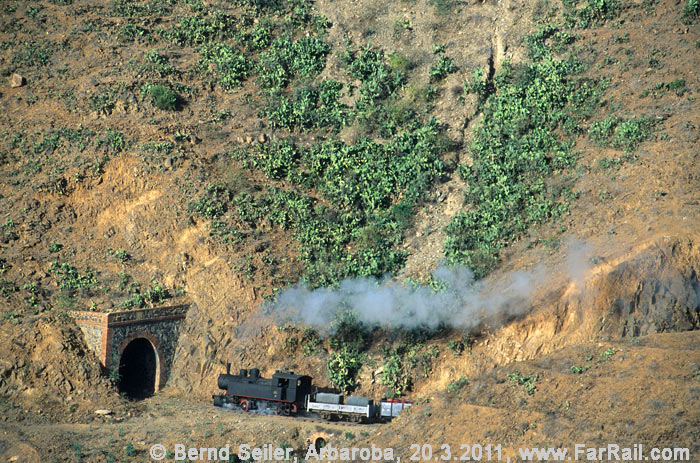 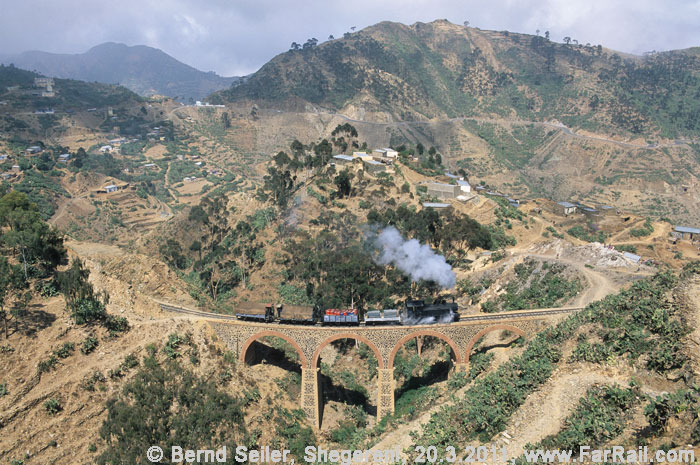 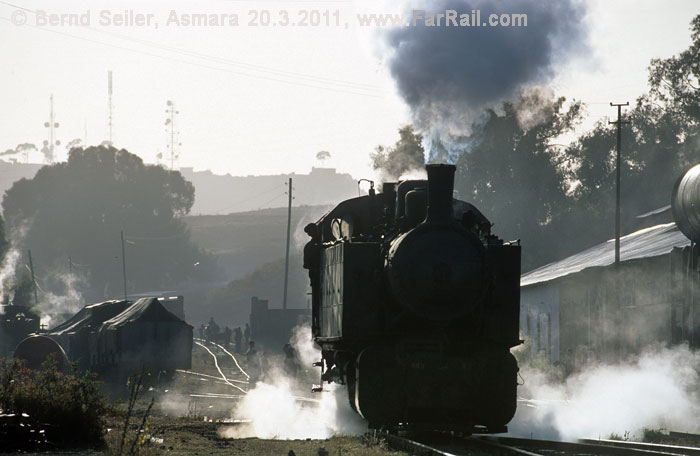 Eritrea was occupied by Ethiopia for many years. After gaining independence in 1993, some of the former railway staff started to rebuild their totally destroyed railway. Some of the Mallets, built by Ansaldo (Italy) in 1938, were brought back to life. Also one of the small Breda built shunters, two diesel locos and two diesel railcars (one from 1935) have been put back into working order. These vintage machines are operated by similarly well aged railwaymen, and are used for specials on a line which can easily be compared to the lines in the Andes, the Semmering in Austria or the Darjeeling railway. Spectacular mountain sections with gradients of up to 3.5% were needed to enable the 950mm gauge line to gain roughly 2,400m in height over a distance of some 120 kms. There are many tunnels and stone viaducts. You can see deep gorges, steep rock faces and valleys, overlooking the mountains, covered in clouds … but only for a brief spell before you enter the next tunnel ...

The capital of Eritrea, Asmara, has an irresistible Italian flair. Whether you like a pizza or a Cappuccino in the afternoon in a garden restaurant, the “Dolce Vita” is everywhere in the streets of Asmara. The Art Déco style buildings give the city a real Italian flavour. It’s on the list of prospects for world heritage status. If you want, you can stay a bit longer here for a holiday. You’ll not be bored! 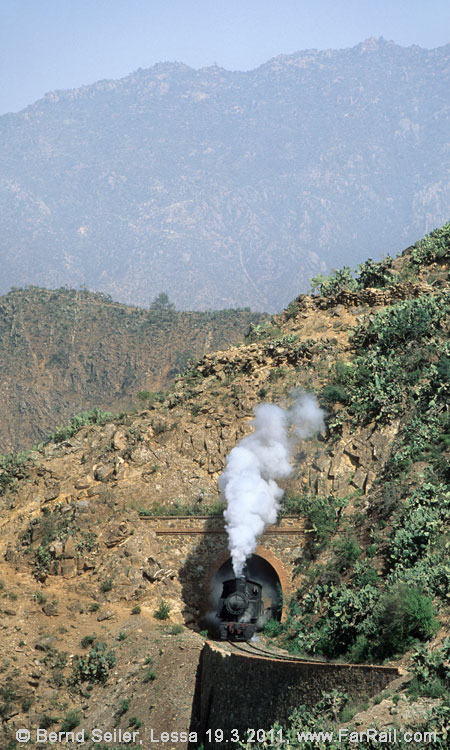 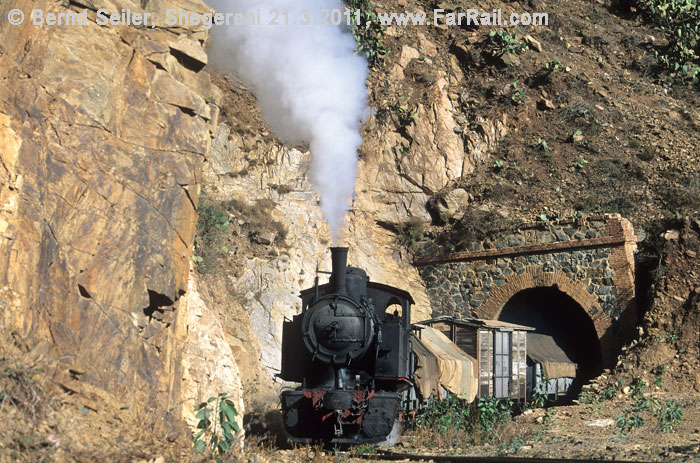 The line runs from Massawa harbour through relatively flat coastal land, with a desert character up to Mai Atal (km 29). After Mai Atal several dry riverbeds are crossed by long stone arched viaducts before the ascent becomes noticeable. Before Ghinda (70 km, approx. 1,000m above sea level) there are the first tunnels. Then the really breathtaking part of the line starts, with many tunnels, bends, bridges and retaining walls. The summit is reached at 2,430m above sea level between Arbaroba and Asmara (km 118). After Asmara the line runs through slightly flatter country but this part hasn’t been rebuilt yet.

The railway, as already mentioned, was built through some difficult terrain. There are photo locations which only have room for ten to 15 photographers. In these cases we’ll make several run pasts until everyone has got the shot. This also means that strict discipline is required. Nobody should get in the way of others, even if their location is supposedly better. If this is indeed the case other people will feel the same and the position of the shot can be altered. Our time for photography is naturally limited by the shadows of the mountains in early morning and late evening and by the harsh light at midday. We won’t waste energy trying to get useful shots in the midday sun. 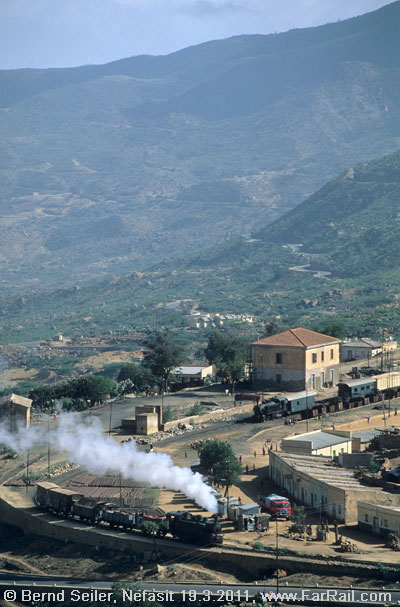 Please don’t get carried away with the scenery, we are in the mountains. One wrong step can lead to a fall that can seriously endanger your health or even your life. If you take part in this tour you do so at your own risk, particularly when getting out of the train along the line and moving through the terrain. If you aren’t up to reaching a certain photo point, for example because the wine the night before was very nice, please stay in the train! There will be other opportunities that can be reached more easily and will be just as good. 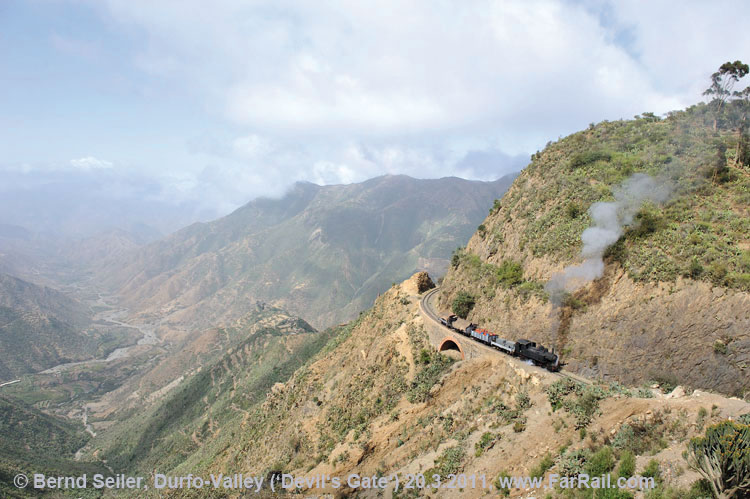 Eritrea is a country which has only recently gained independence. Before that, a civil war and independence war raged for decades. Even after that there was more fighting over the exact borders with Ethiopia. The country has not fully recovered from these long periods of war, there is widespread poverty. Unlike many other African countries this hasn’t lead to high crime. Eritrea is one of the safest countries in the whole of Africa. The locals are very friendly. Even though tourism is still in its infancy, our hotels are of a good standard (matching 2 star hotels in western Europe) and are clean. They often kept the charm of the 1930ies.

In Asmara we offer an option: if you like you can stay in a lovely four star hotel near the city centre. They have only big beds that’s why they are only suitable for single room bookings or travellers with their partner. It’s a classical hotel from the late 19th century which was, just recently, refurbished. Wireless Internet is available in the lobby. Because we can’t offer a buffet-style dinner here, we didn’t include the dinner for this hotel. Instead we reduced the extra price for staying in this nice hotel to 170 Pounds (plus single supplement except when you’re travelling with your partner). 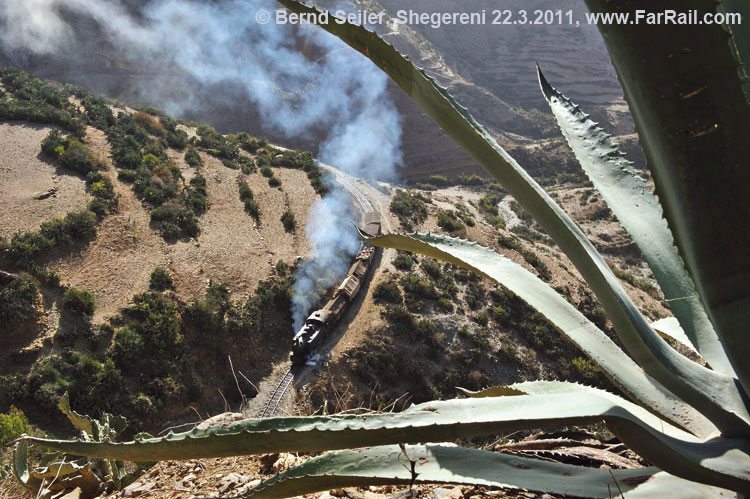 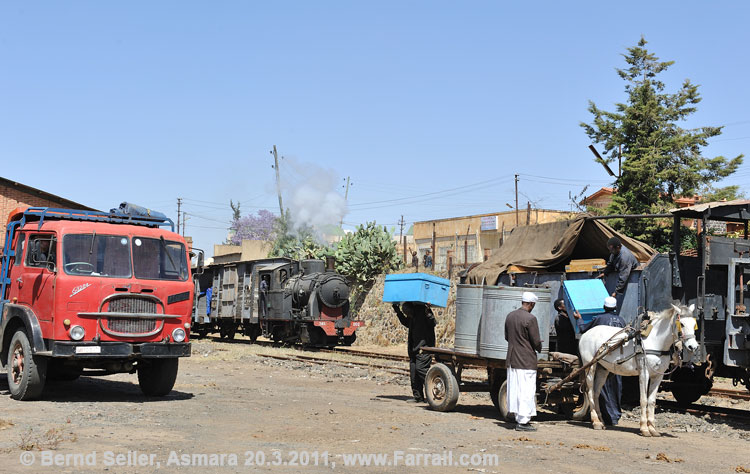 We expect temperatures of 25 degrees in Asmara and around 28 degrees in Keren. In Asmara the temperature can drop to some ten degrees in the early morning. Rain is rather unlikely but the area near Ghinda often experiences fog, which can allow for some really atmospheric shots – or make photography impossible for a couple of hours.

Under 2,000 m height there is a risk of malaria throughout the year. The best defence against malaria is to avoid getting bitten by mosquitoes, so it’s recommended you wear long clothing in the evening. Long clothing is also a cultural necessity as half of the population is Muslim (the other half Christian). Short trousers are unsuitable for wearing in public even if it’s really hot. If you see some foreign tourists wearing short trousers it should not be copied. Short trousers indicate that you don’t care for their culture and you’re somewhat arrogant.

The electricity supply (220 Volts) is reasonably dependable; often you will need an adapter for your plugs. There is a mobile phone network available but no western company signed a roaming contract so far. That’s why you can’t use the mobile network of Eritrea. International calls are possible from our hotel in Asmara. You can also call abroad in the large towns via the telephone exchange. In Asmara there is internet access. 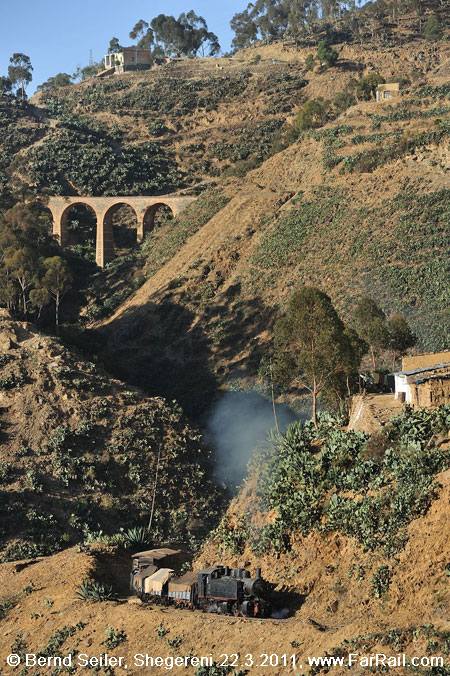 You should take all the usual precautions for a stay in the tropics if you prefer a trouble free trip rather than a hospital stay. Basic rules like only eating pealed and/or cooked food and not drinking tap water should be abided by. Besides the local food, which you really should try, many Italian influences remain from the colonial time. It’s no problem getting a pizza in Asmara. Breakfast and dinner are planned in our hotel (except early morning departures) while lunch is a small snack which will be served in the train. Cold drinks can also be bought in the train for very reasonable prices.

We’re expecting these locomotives to be serviceable:

We can’t guarantee that a certain locomotive is serviceable but we can guarantee there will be sufficient locomotives to haul all planned trains with steam. 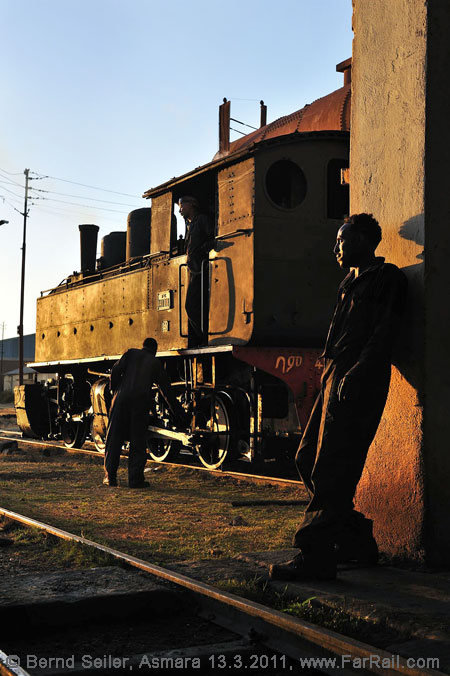 The railwaymen have already entertained several groups of railway enthusiasts and know what we want and how we want it. Now they even get used to the high demands of a FarRail Tours charter train event. Even so, we are in Africa where time has a different meaning from that in our hurried world. We have to account for problems on a railway and with engines that are only used every few weeks. Serious delays are possible. But there will always be a solution. Don’t lose your temper or spoil other people’s fun if, for example, an injector doesn’t behave itself. The quality of their coal is doubtful and we may need some extra breaks to raise steam pressure. Even with the worst possible timekeeping you’re guaranteed many very good pictures of a great mountain landscape. In the case of technical problems with the locos we might have to cancel trains with no refund possible.

For the excursion to Keren you need a special permit which is included in the tour arrangements. 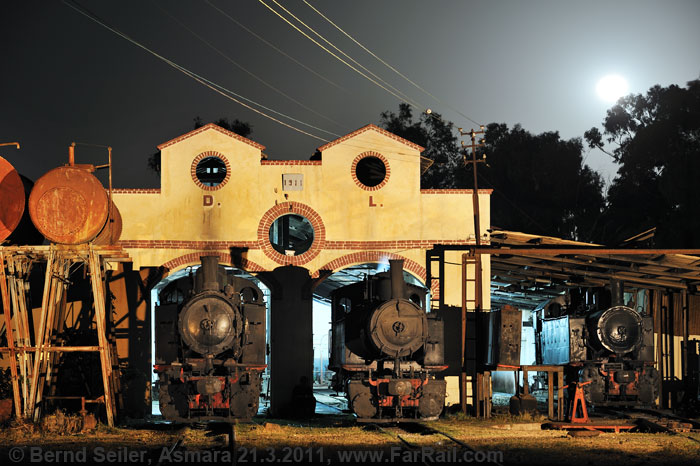 As a service to our UK-based clients FarRail Tours accepts and will continue to accept payments made out in Pounds Sterling until further notice. However, please note that all prices quoted in Pounds Sterling are indicative only and are subject to change without prior notice. This measure was taken by FarRail Tours because of the unprecedented volatility in the international foreign exchange markets and its impact on the valuation of the Pound Sterling versus other major currencies, namely the Euro as FarRail Tours' accounting currency. 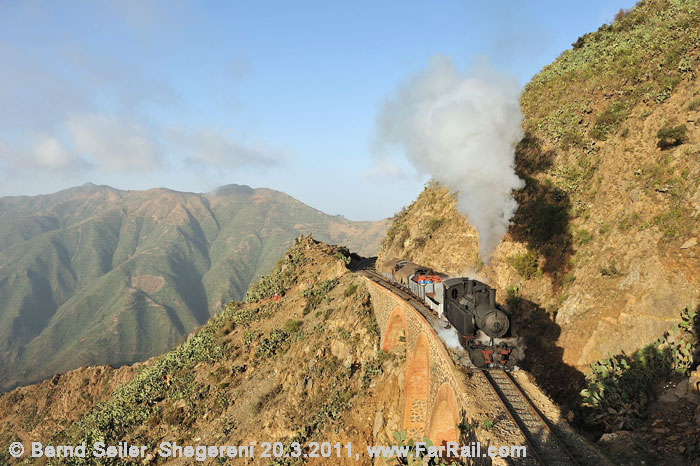 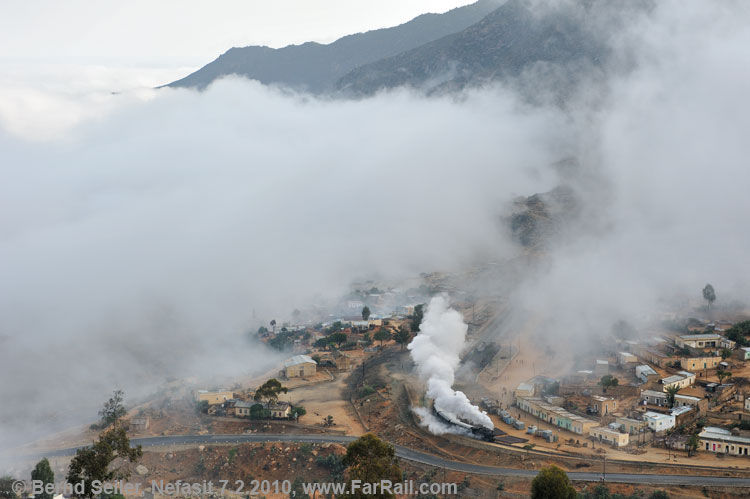 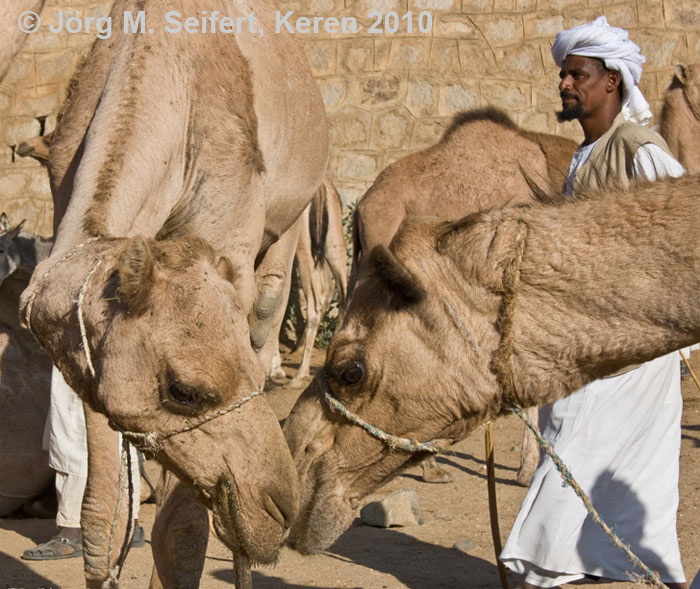