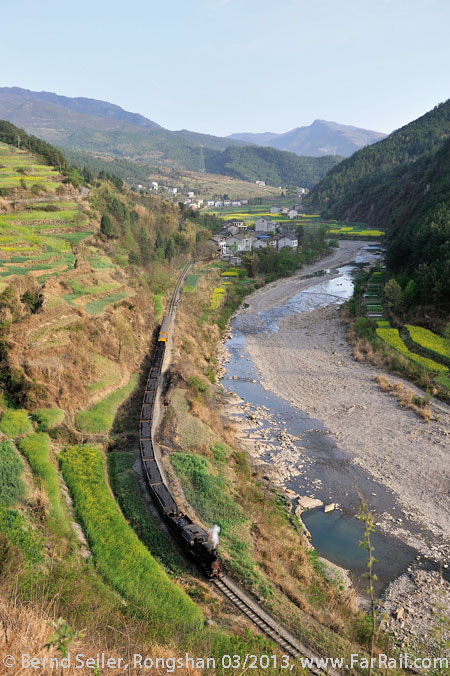 Once upon a time there was a narrow gauge railway which carried coal from mines to an interchange yard. The mines were run by prisoners ... political prisoners, the rumours said. “It is very ill-advised to go there” were the words of a Chinese railway enthusiast who told me about the existence of this line when I met him back in 1999. Since then, I tried virtually everything to gain access to this forbidden line. After twelve years of trial and error, I found someone who finally could get a permit to visit the line at the end of 2012. In March 2013, I guided the first group of foreigners to Rongshan. We were admired like monkeys in a zoo, and we were impressed by the little steam railway running through the mountains of Sichuan province.

They run two to three pairs of trains daily – with 0-8-0 steam class C2 locomotives. The planned electrification hasn’t started yet although there are three brand new electric locos parked in the shed. One thing is for sure, the line will change its face soon. They know about the success of Shibanxi with tourist trains and with the opening of the valley to foreigners (they still need a permit while locals are nowadays allowed to enter the valley without one) it’s quite likely that the unspoilt nature of the valley will be gone forever in the very near future. 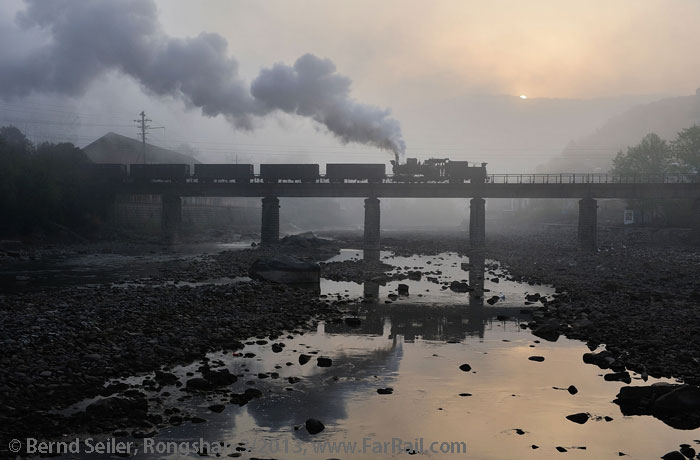 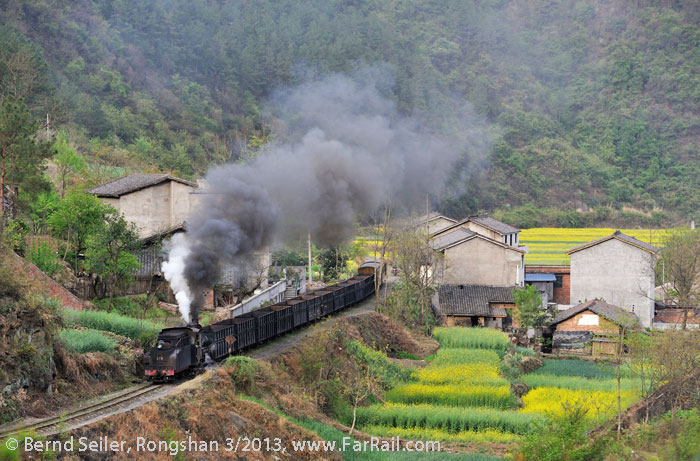 The narrow gauge line was built in the late 1950s. The operation started with the class RJ (Rongjian), built in Chengdu. They were small tank locomotives. Later the current class C2 appeared, built in Dalian - in the 1990s, the nearby narrow gauge line of the Jianyi coal mine railway (near Yuanba) was closed and the Rongshan coal mine railway bought their no.025. It was known as class KN - but is obviously the same type as the Jiayang (Shibanxi) or Weiyuan based locos of the class KP-4 or C2. They bought another loco of this type, no. KN028, which was used for spare parts.

In the mid-1980s four brand new C2 locomotives were delivered to the line. It's remarkable that they came from Haerbin Forestry Machinery Factory; probably the only ones in Sichuan province. Their nos. are 210, 211, 218 and 219. Two of them should be in use during our visit, for shunting operations and line service. 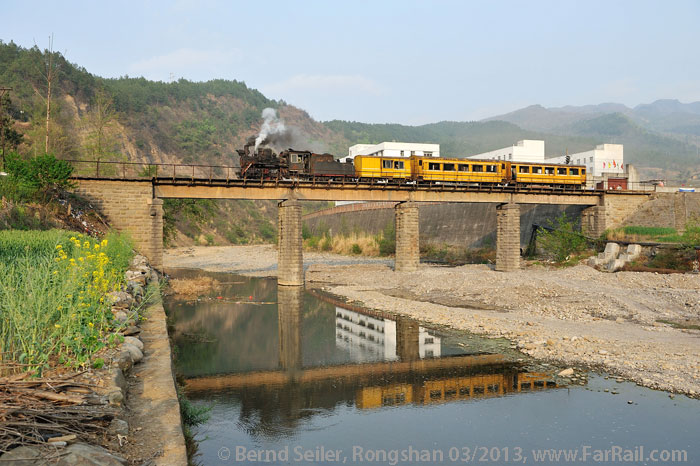 The narrow gauge line starts at its lowest point in Rongshan. There was one line to the north-east to "No. 5", a coal mine in Gaokeng. This line was about three kilometres long. The production at this coal mine dropped off as early as the late 1990s, with only one coal train a day serving the line in its last years. The earthquake which shook the whole of Sichuan province damaged the line, so that they gave it up.

The other line is still in service. It is about seven kilometres long and winds through a scenic, rural and sometimes narrow river valley. The terminus, at mine no.1 in Yujiabian, stands roughly 50 metres higher than Rongshan. As there is no road access to the mine, the line still survives today (there is only a bumpy and narrow road on the other side of the valley which is connected to the village and mine by suspension bridges).

Roughly a third of the way along the line – close to a scenic bridge and a not so scenic tunnel – is a prison camp with modern concrete buildings. This prison incorporates a mine and production from this mine used to be the reason the line was so busy. The station at the prison is called Shanziba. 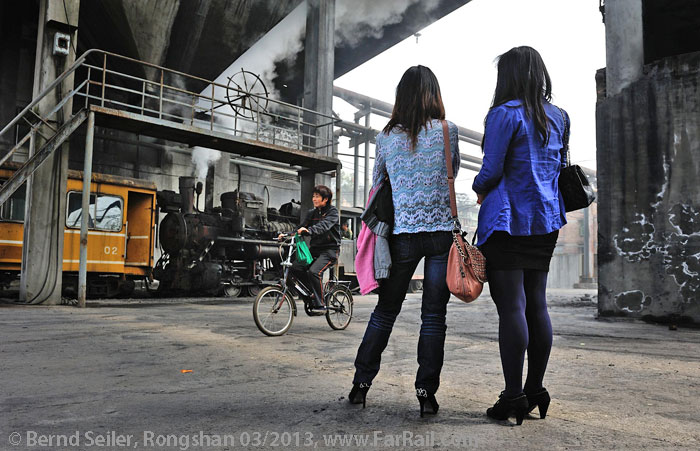 During its heyday, the railway had more than ten locomotives. Nowadays, one or two locomotives can handle all the traffic. We expect to see two to three pairs of trains a day.

Trains leave Rongshan tender first uphill and return chimney first downhill ... not what a photographer really wants, but that's been their style of operation for decades. The passenger trains consist of two yellow painted passenger coaches. Often they also take a platform wagon and a caboose with them. Coal wagons can be seen in most of the trains. Very long trains require a banking steam locomotive when leaving Rongshan. Sometimes the passenger coaches are not attached to the train and you can see pure coal trains.

There are a good number of nice photo locations, and in March we expect the rape to be flourishing, giving the countryside a yellow touch.

The timetable of the passenger trains: 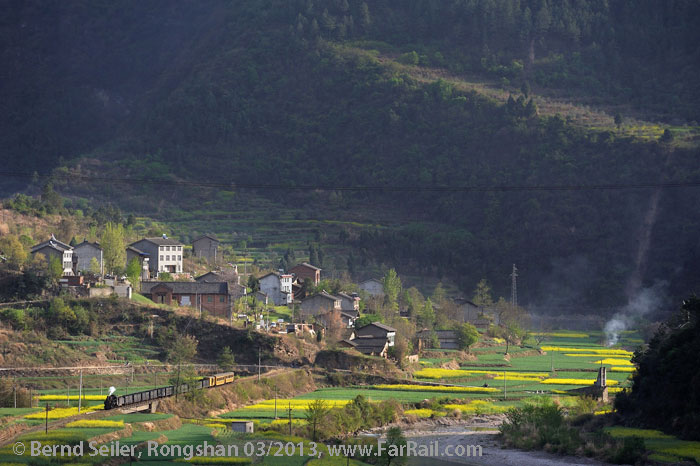 The local authorities will issue a permit for us to visit the line. The prison is closed now. However, it might be possible, that we’ll go there without success. Since the mines are not run by prisoners any more the price for the coal went up. The company (45% of it still belongs to the prison authorities of Sichuan province) seems to have financial problems and, hence, they didn’t pay the railwaymen for a long time. They have recently been on strike and could well do so again. There could be other reasons, too, why the railway may not be running in March 2014. Such incidents are beyond our control and we would not be able to do anything about them other than to go on to the tourist railway at Shibanxi instead. 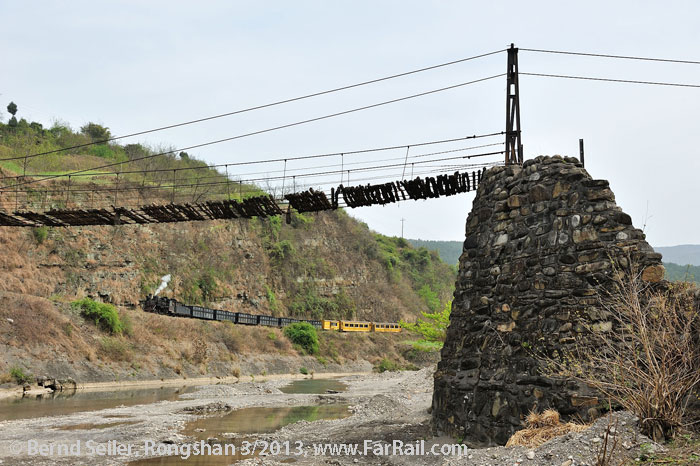 The existence of the line is in danger. Rumours are around that they'll electrify the line soon – but so far there is no evidence, not even the poles which have been reported already. On the other hand they have three electric locomotives parked in the depot. Every Chinese New Year, when they often make big decisions, might bring a change. The current track wouldn’t hold the heavy electrics (more than double the axle load of a C2), but there are hundreds if not thousands of new concrete sleepers laying around in the yard at Rongshan. Whether this is to rebuild the line to mine no.5 to establish a tourist service or to strengthen the existing track to Yujiabian to allow the electrics to take over the traffic, remains unclear. Hence, we can't give any kind of guarantee. Without a pioneering spirit you should not book this tour. It's a risk. On the other hand, the window of opportunity for visiting the world’s last non-tourist revenue steam service on a narrow gauge railway might be very small. There is much evidence that those who come later might be too late. Another one bites the dust ...

The voltage in is 220 Volts, 50 Hertz. Sometimes you need an adaptor for the power outlets. uses the European mobile phone (GSM) standard. 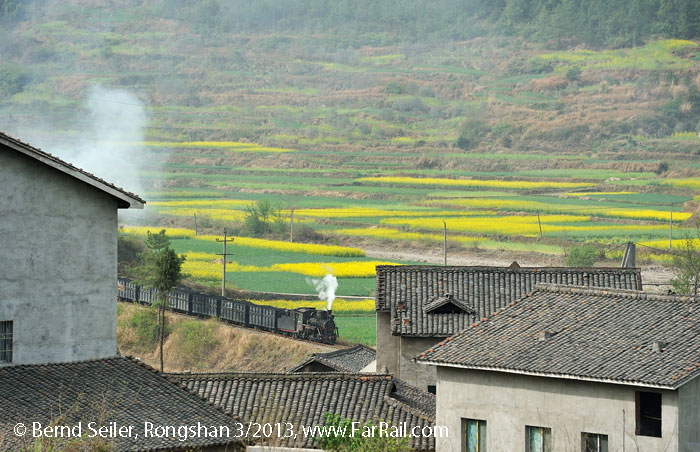 Our philosophy is to provide opportunities to get that perfect shot rather than a time consuming 5-star breakfast buffet (which is difficult to get there anyway). On occasions lunch will be served as a packed meal. Beverages are not included in the tour price.

The hotel in Rongshan is so basic (one shower and two toilets at the end of each floor) that we opted for a decent (Chinese standard) hotel in Guangyuan. Hotels, charter buses and trains represent the standard of our host country, which may deviate from European and American expectations. The hotels used will be of medium class (three to four stars). While we will endeavour to avoid long walks, some photo positions may require an extra but worthwhile effort.

Hygienic and environmental standards in do not conform to European, Australian or American expectations. Carrying some toiletries in your photo bag is hence advisable. Please bear in mind that accommodation and transportation in falls short of EU/US safety standards. Always use common sense when crossing roads and railway tracks. FarRail Tours cannot be held responsible and will not accept any liability whatsoever in the case of any accident or damage. We suggest you take out a comprehensive overseas accident and health insurance policy. 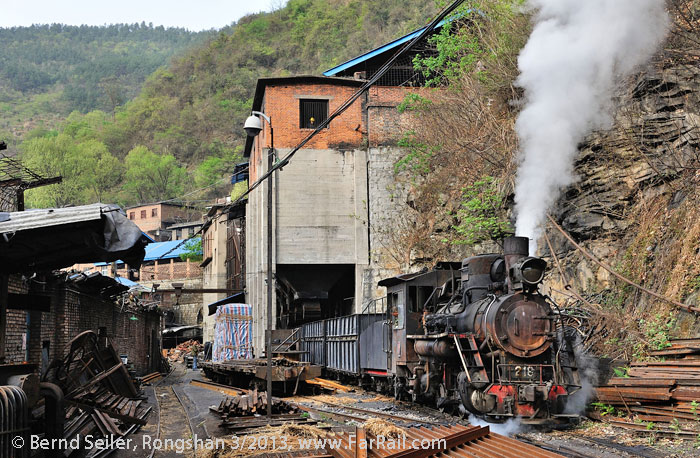 Prices vary enormously, depending where you start from and how you want to fly. Cheapest offers from Europe to Beijing could be found below £500 although you can expect around £600 to £700. FarRail Tours can book the flight for you, if you prefer. The domestic flight to Guangyuan is included. Please also consider the visa expenses which vary from country to country.

More pictures from the prison railway Rongshan you can find here: 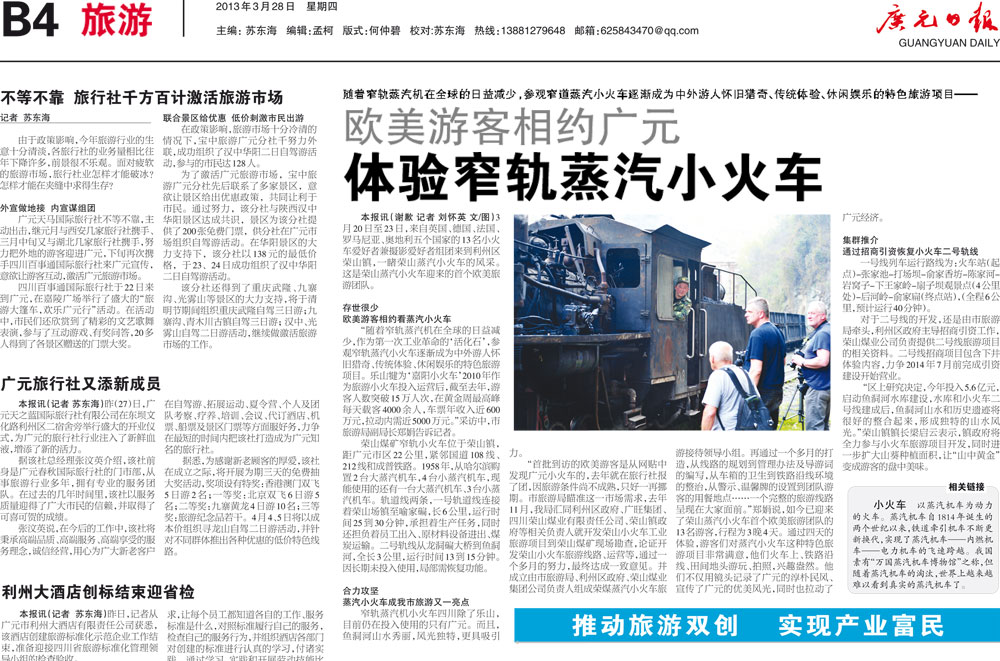 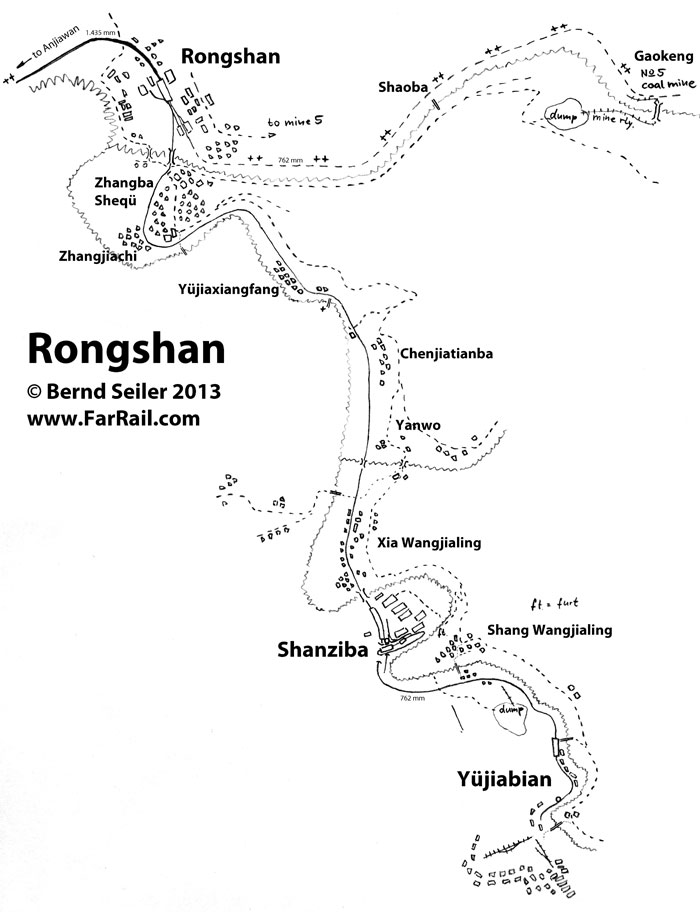