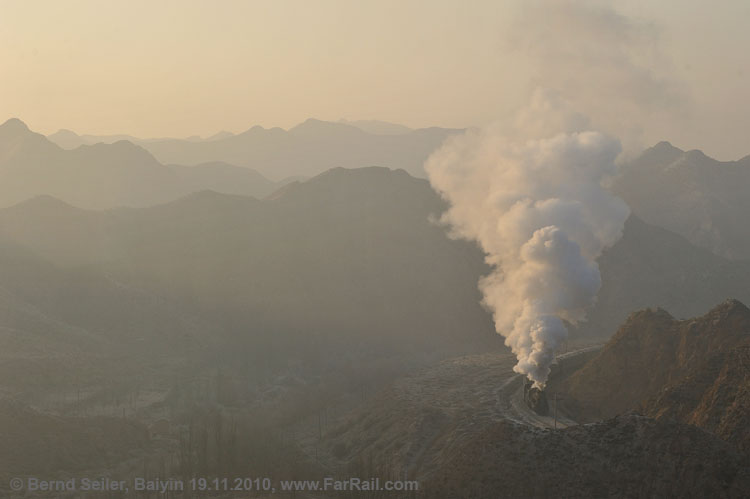 There are still real gems in the western part of China which can’t be topped by any steam gala anywhere in the world. This is real steam, daily work at the limit of adhesion, sometimes filthy and always a hundred percent authentic.

How long will it last? No-one can tell. But one thing for sure: it won’t last forever. Real steam is declining in numbers and lines, it’s a question of time when the last breath of a steam locomotive will be blown in the wind and there’s only “plastic steam” to give you a rough impression how the age of steam really was.

We’ll visit the epicentre of steam activities in the world: to the open cast mine of Sandaoling (near Hami) with their JS and SY 2-8-2s driven to the limits. In addition we’ll visit the desert line of Yamansu and the loess mountains north of Lanzhou.

We expect to see almost 30 locomotives in steam on this tour. Can any “super steam gala” compete? 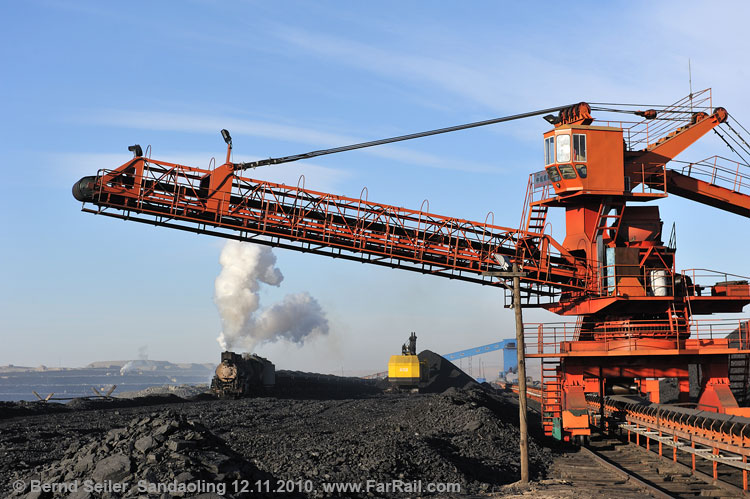 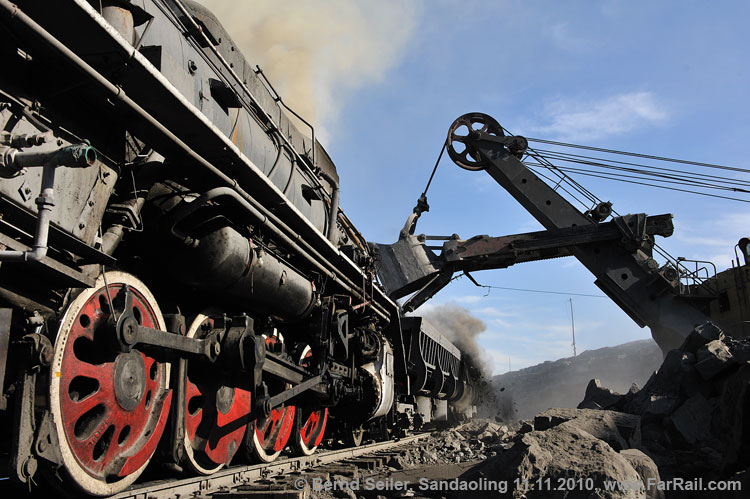 Many railway enthusiasts don’t consider a visit to Sandaoling because it is far away from other steam lines and many trains (but not all) in the pit are pushed. But this is only half of the truth. Of course there are hauled trains as well. All coal trains from the loading facilities deep in the pit need to climb out of the open cast mine to reach the unloading place. This is an almost 4 miles trash of heavy trains. In the best case you can witness this spectacle about every half an hour. Sometimes there is a gap up to two hours, but then it starts again!

The given name of our local guide can be translated as “Moonflower”. This says a lot about the countryside. The line from the state railway to the open cast mine (where trains are used to be hauled chimney first and often assisted by a banker) is now dieselised but a very few are still handled by steam. The line is really steep (although you can’t see it) and trains usually struggle. 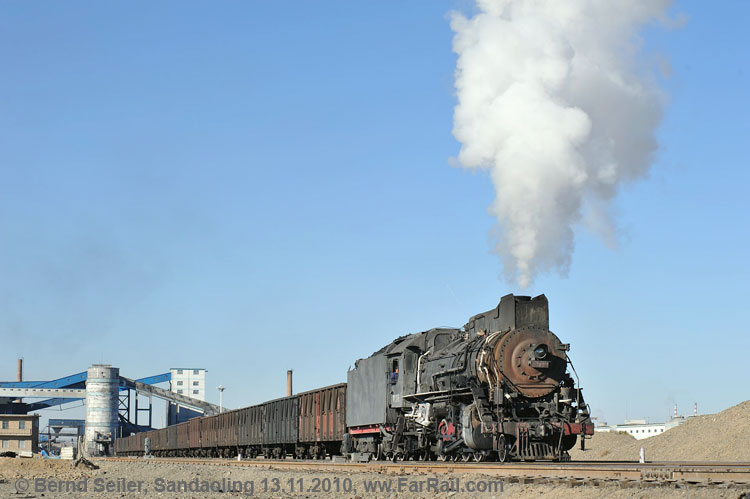 The pushed trains in the open cast pit are “push-pull” trains with a small signal wagon at the end of each train. With semaphores on the roof of these cabooses the loco driver gets the signal forward. This is a very unusual operation pattern in China and well worth photographing. Sunsets in Sandaoling can be amazing as well. There are quite a lot of reasons to go there but the main reason is that normally there are more than 25 JS working in the area! Where else in the world can you find such a concentration of steam motive power? 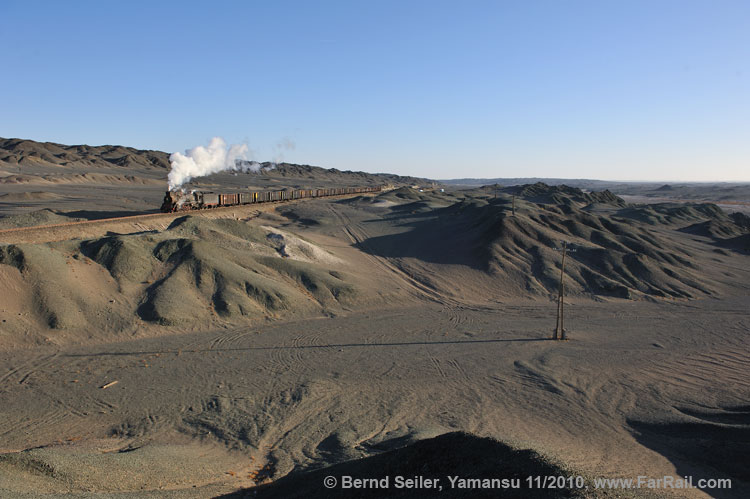 South-east of Hami, in Shankou, a 36 km long branch line leaves the main line Wulumuqi – Lanzhou towards Yamansu. In Yamansu you’ll find an open cast mine (ore, closed) and a deep mine (working). The ore trains to this place running through an amazing desert countryside. The local depot serves two JS, some others are dumped in serviceable condition or out of use. The triangle is not used to turn the locomotives, so the daily pair of trains (in the best case two pairs of trains) to Shankou is hauled tender first while the southbound trains run chimney first. Most of the line is uphill against chimney first trains. The line passes an impressive dry stone-desert. Especially close to Shankou are some interesting spots in the mountains. Most parts of the line are not accessible by road, so we’ll charter minibuses to get access to the photo positions. Even for tender first trains there are some reasonable positions like the steep gradient just beyond Yamansu and before Shankou. The recently reported problems with the local police are well known to us. We have arranged an official permit to visit the depot. They were talking about purchasing diesel locomotives for long. But so far nothing happened. We’ll keep the fingers crossed that we’ll not be to late to see this fantastic and unique line in steam. There is another risk: the line depends totally from the wagon delivery by the state railway. When they do not deliver wagons, there is no train to be moved. 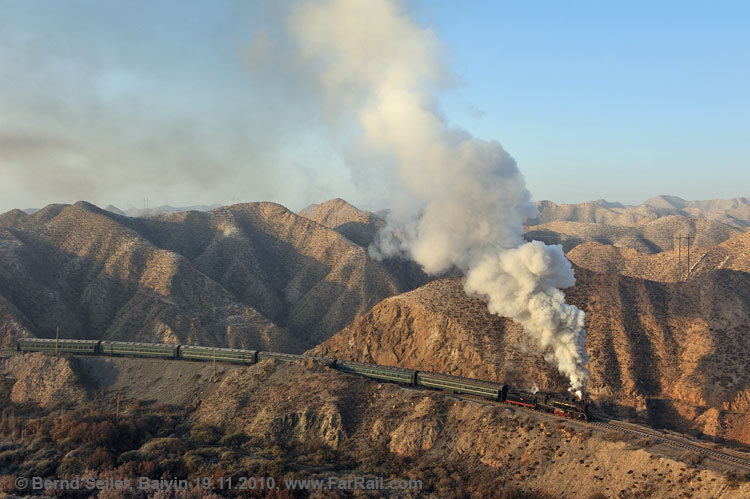 Baiyin is probably the last real challenge for the class SY in the mountains. Besides industrial locations, you have the only known line into the loess mountains which is still steam operated. Baiyin is close to the Yellow River and the typical loess mountain countryside is everywhere around. This line offers it all: green, traditional passenger trains, steep gradients with freight trains struggling up the line, and mountain scenery. This is one of the most beautiful lines in China that still sees regular steam service. The little workshop is able to carry out overhauls. We’ll visit it, of course. They recently acquired diesel locomotives. One was on use on the line while the others took over heavy shunting operation in the extensive yard area. The freight train to the terminus, always a good bank for impressive pictures, is nowadays almost always diesel hauled. However, four steam locos of class SY are still in use. Because the company still earns good money from their products (which includes silver) they are financially capable of buying a batch of diesels whenever they wish to do so. So it’s not sure that we’ll see all four SYs in steam.

The first chimney first passenger train runs before sunrise. But with a digital equipment or a video you’ll be able to capture impressive sceneries in the dusk.

The tour was planned in March 2011. Although it’s only a few months before we go to China it’s not certain that all lines will still have steam. In the unlikely case one line will be dieselised before we arrive, we will make different arrangements to see as much steam as possible. 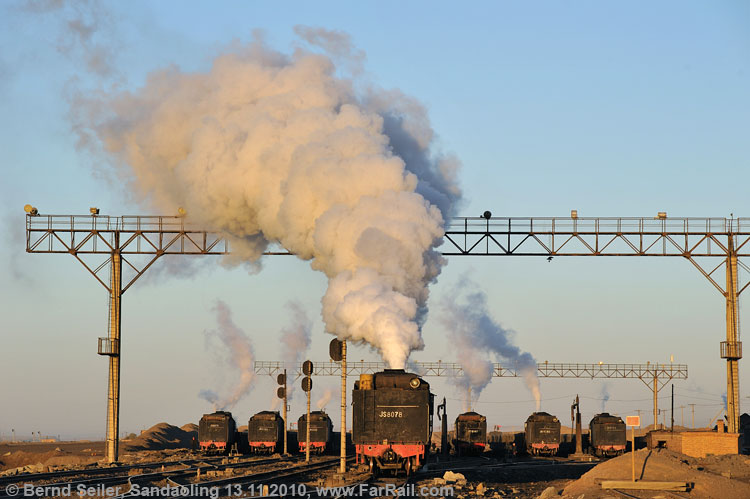 This tour is designed for both dedicated photographers and video film makers. Our philosophy is to provide opportunities to get that perfect sunrise shot rather than a time consuming 5-star breakfast buffet. Breakfast and lunch will be usually served as a packed meal. Dinner is planned to be a proper (Chinese) meal. Beverages are not included in the tour price.

Hotels, charter buses and trains represent the standard of our host country, which may deviate from European or North American expectations. While we will endeavour to avoid long walks, some photo positions may require an extra but worthwhile effort.

The hotels used will be of medium class but in remote areas sometimes they are more basic. A hot shower and a private bath are available everywhere except in Yamansu, where we’ll enjoy a 1950s style guesthouse. This guesthouse has only three and four bed room, Asian toilets of doubtful cleanliness and no shower at all. Warm water is rare as well. I would rate it as a one black hole standard. But we need to stay there if we want to see the trains on the desert line without getting up very early in the morning. For one night it’s acceptable and rather an experience than a torture. Single rooms are very limited there. 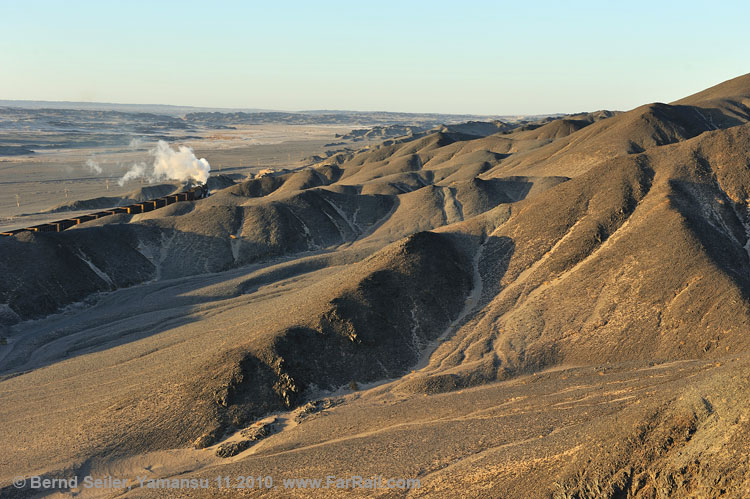 The train rides are booked in soft sleeper class (four berth compartments). As the reservation system in China is a typical quota system where the station of origin typically gets an allotment of 50 % of the available tickets, it is not guaranteed that we can get soft sleeper tickets for all our rides. In such cases we’ll use hard sleeper class, which, however, is not as hard as the name suggests. Hard sleeper compartments are open and normally comprise six berths. 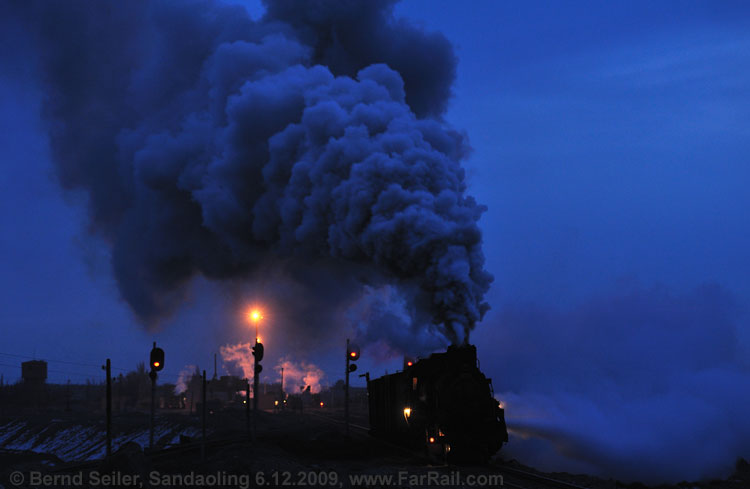 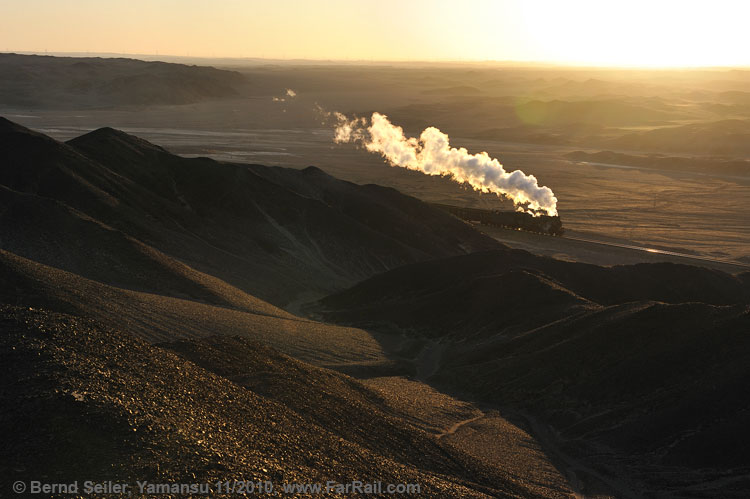