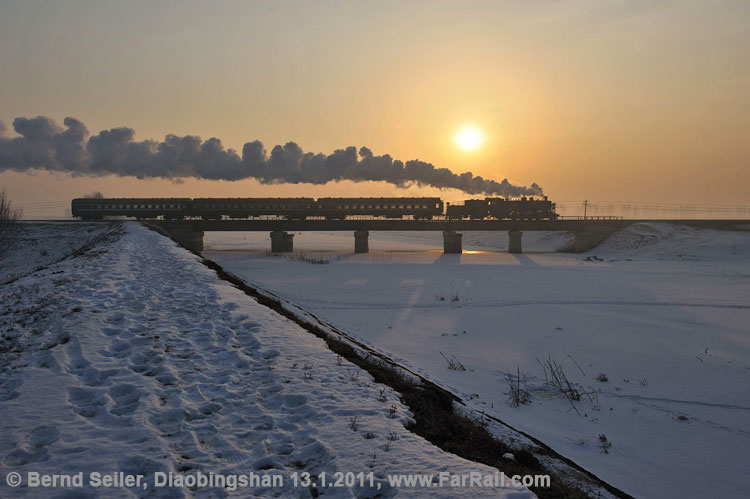 Steam in China is over, some enthusiasts know. Sure, the age of steam all over China is history, but on this trip we’ll prove once more that steam is not history yet, that there is still life in the dog. Steam still hauls long trains over gradients, struggling in front of too heavy trains, trundling with passenger trains through rural countryside and serves dirty industrial sites. Often only the adhesion between the wheels and the rails is the limit! You can still experience how 2-8-2 locomotives of the classes SY and JS throw a mountain of steam into a crystal clear, blue winter sky.

This tour is designed for the needs of travellers who have never been to China as well as for those who have been several times to visit the last strongholds of steam. It’s made to inhale steam at its best. To see supershine locomotives as well as filthy coal mine locos, to see shunters with a few wagons as well as locomotives struggling on steep gradients. Besides the industrial backdrops, we’ll find open, hilly countryside along the way which combine to give the best opportunities for amazing shots.

The Beitai steelworks will give you an inside view of one of the very last steelworks operated by steam. The most interesting operation is near the blast furnace and the slag tip.

Although we’re witnesses to a sharp decline in the number of steam locomotives and lines served by steam in China, it is still the “must go” place for enthusiasts of real steam. You’ll not be disappointed, even if you’ve never made it to China before and don’t know what to expect (in fact, especially then!).

First of all, we are at the edge of a steam free age, so some of the locations are merely a shadow of their former self but still worth a visit. However, we can’t rule out that some of the lines on the list may have changed to diesel locomotives before we arrive or even closed down. Information is from spring 2011, months before we go to these sites. There is not always a substitute nearby if a line is dieselised or closed. 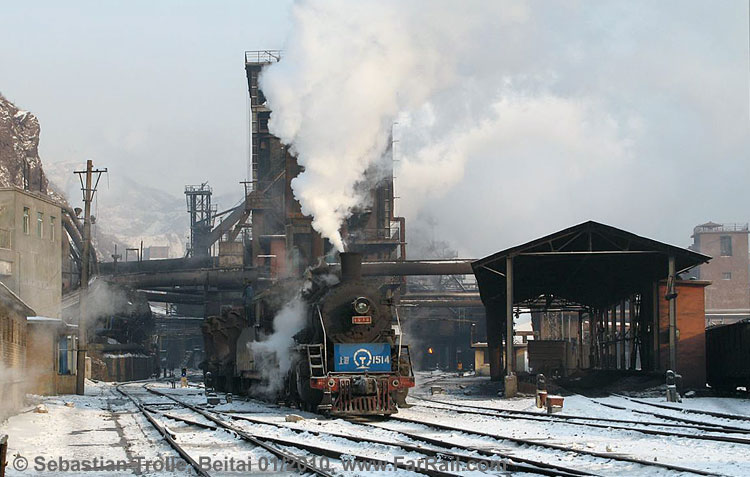 The steelworks at Beitai are among the very last steelworks in the world which are still using steam locomotives. Besides a fleet of diesel locomotives they’re still using nine locomotives of the class SY. They’re working at the most interesting places like the blast furnace and the slag tip. Night photography is not permitted here, but you’ll very likely get some impressive pictures of real industrial railways.

The coal mine system at Diaobingshan (formerly Tiefa) was dieselised in 2004/2005 for freight services. Fortunately, some of the passenger trains remain steam hauled. Although they have a new non steam enthusiast boss now, a highly ranked official said they’ll keep their steam locos running for at least another year. A diesel hauled passenger train would be at least twice as expensive as a steam hauled service. On the four lines there are some eight to 16 steam hauled passenger trains a day, sometimes with several departures within a few minutes of each other. So this system is still worth a visit with some very exciting action and photo locations. 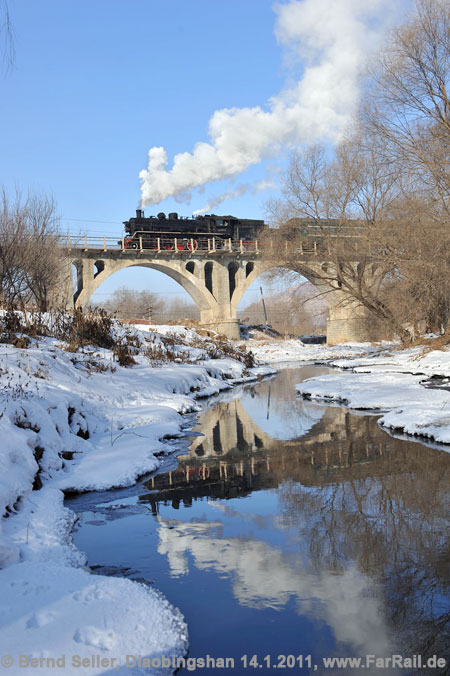 The most scenic part of the system is the line from Diaobingshan (the operational centre) to Faku. Trains pass through a tunnel on this line. This line is entirely diesel operated, but we’ll try our best to get a steam train on this line. As they have neither a turntable nor use their wye at the terminus, locomotives run tender first in one direction and chimney first the other. It’s unpredictable which trains will be tender and which ones chimney first but we have our contacts to find out. Visits to the depot and the stabling point are planned as well. Diaobingshan’s SYs are nicely maintained and include two 1999 built engines.

Fuxin has an operation of about a dozen SYs, but several diesels are in use as well. There are shots with grim industrial and mine backdrops possible. The daily line up at the shift change is a sight in itself. Many of the small houses along the lines have been demolished and replaced by modern buildings now but there are still positions left which are worth pointing the camera at. 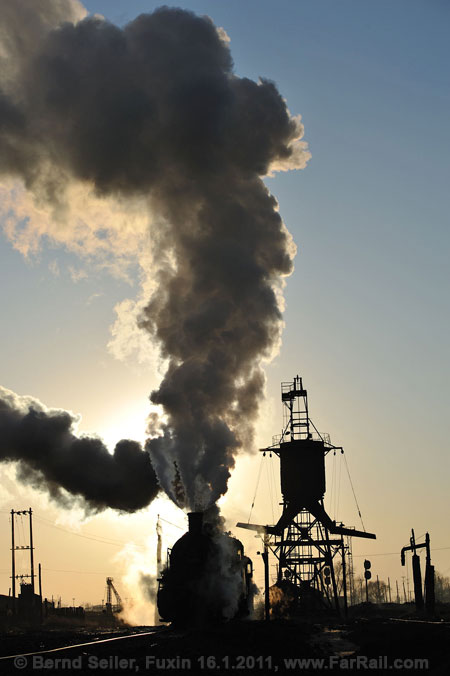 In late 2010 we still found eleven SYs under steam, seven of them in line service. Others would call this a Mega Steam Gala ... It’s just a glimpse of what it has been, but even this little part is such a powerful playground for photographers and video film makers that there is hardly any competition from Europe. The density of possible exciting industrial shots per square inch is similar to what you can find in Europe per square mile!

Not many enthusiasts have been to Pingzhuang because there’s been better action nearby – the famous Jingpeng pass. Those who have been here in earlier years could have seen the last KD6 (US built class S160 2-8-0) in service, which was sold to Diaobingshan a couple of years ago where it is now preserved. However, with the decline of steam, it was “discovered“ that Pingzhuang is well worth a visit. It’s not only their fully deflectored SY, they have a line to underground mines which offers, at least in the colourful autumn, some nice, rural line shots. On two major gradients on this line locomotives have to work hard. 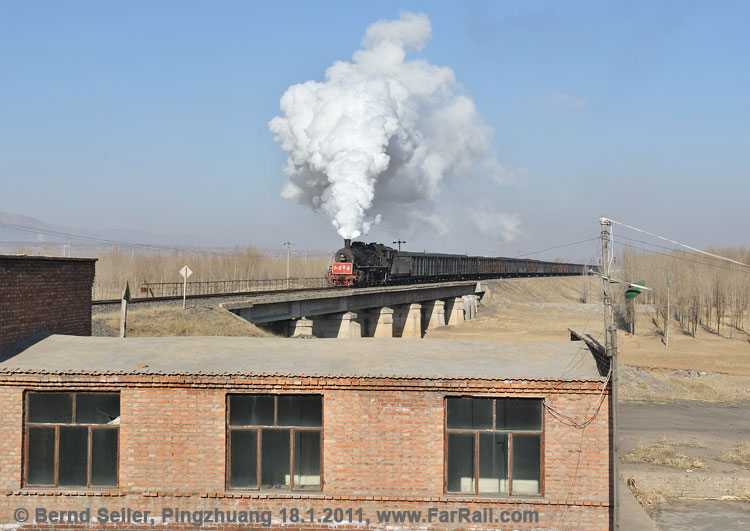 Most of the trains into the open cast mine (so far there is no official permit to visit this site available although the author got one in 1995) are hauled by electric locomotives. Only works trains are steam hauled. We may be able to take a look from a corner down into the pit. You can just walk in as well. This has been proven to be hassle-free, however, without permit it’s at your own risk.

Besides the new diesels in Yuanbaoshan, there have survived a few of their immaculate JS class 2-8-2s. These engines carry big smoke deflectors which make them exceptionally attractive. Usually the diesels cover most of the trains but the mixed train can be often seen behind steam. It’s not possible to guarantee anything here but the chances are good that we’ll see some steam hauled trains. The line has a nice, long bridge and at both ends steep gradients where the locos need to be operated with a fully open regulator. 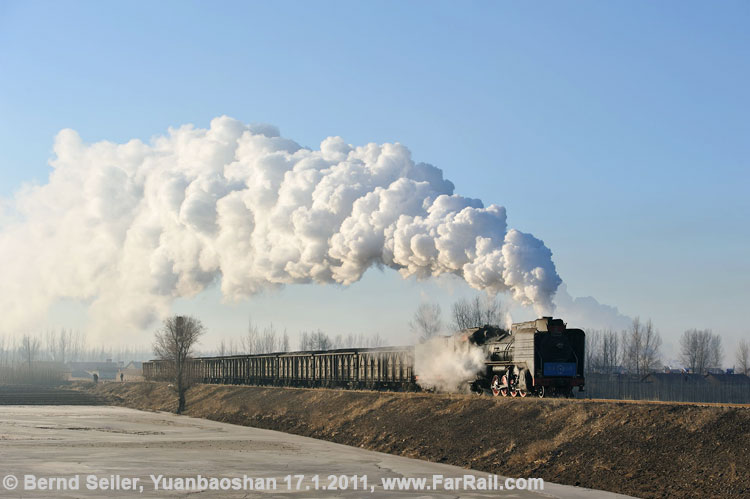 There is no fixed timetable and the trains run on demand. We need to keep in touch with the control office to get information about train movements in time.

The tour was planned in April 2011. Although it’s only a few months before we go to China, it’s not certain that all lines will still have steam. In the event that one line is dieselised before we arrive, we will make different arrangements to see as much steam as possible. 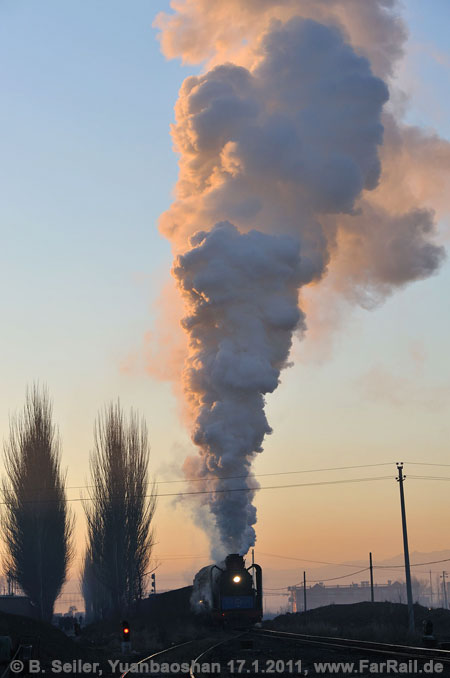 We expect the lowest morning temperatures to be about minus 20 degrees Centigrade in the early morning while afternoon temperatures can reach about zero degrees Centigrade. The voltage in China is 220 Volts, 50 Hertz. Sometimes you need an adapter for the power outlets. China uses the European mobile phone (GSM) standard.

This tour is designed for both dedicated photographers and video filmmakers. Our philosophy is to provide opportunities to get that perfect sunrise shot rather than a time consuming 5-star breakfast buffet (which is not available in remote locations in China anyway). On occasions, lunch will be served as a packed meal. Beverages are not included in the tour price.

Charter buses and trains represent the standard of our host country, which deviates from European and North American expectations. While we will endeavour to avoid long walks, some photo positions may require an extra but worthwhile effort. According to Chinese standards most of our hotels are three or four star hotels. 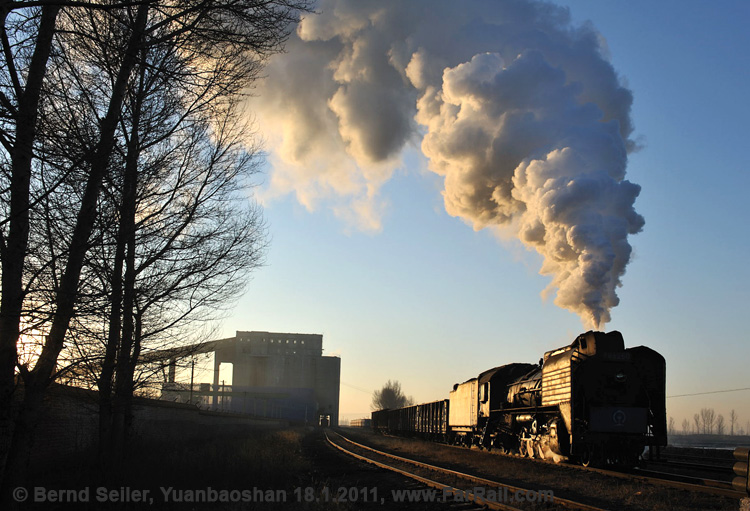 The distances between steam locations in China are very long. Please be prepared for some overnight train rides and some long bus rides. Carrying a book with you might be a good idea.

Hygienic and environmental standards in China do not conform to European or American expectations. Carrying some toiletries in your photo bag is hence advisable. Please bear in mind that accommodation and transport in China falls short of EU/US safety standards. Always use common sense when crossing roads and railway tracks. FarRail Tours cannot be held responsible and will not accept any liability whatsoever in the case of any accident or damage. We suggest you take out a comprehensive overseas accident and health insurance policy. 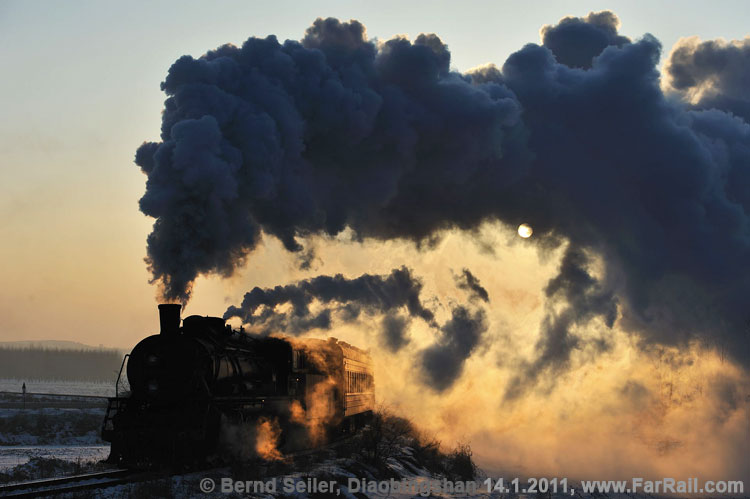 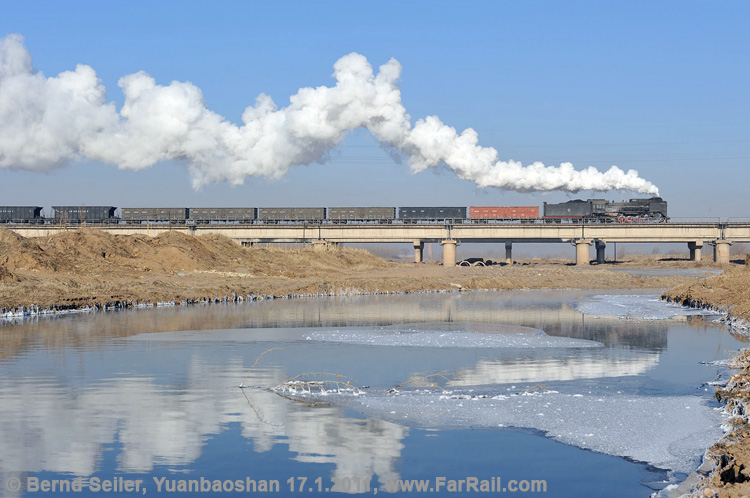