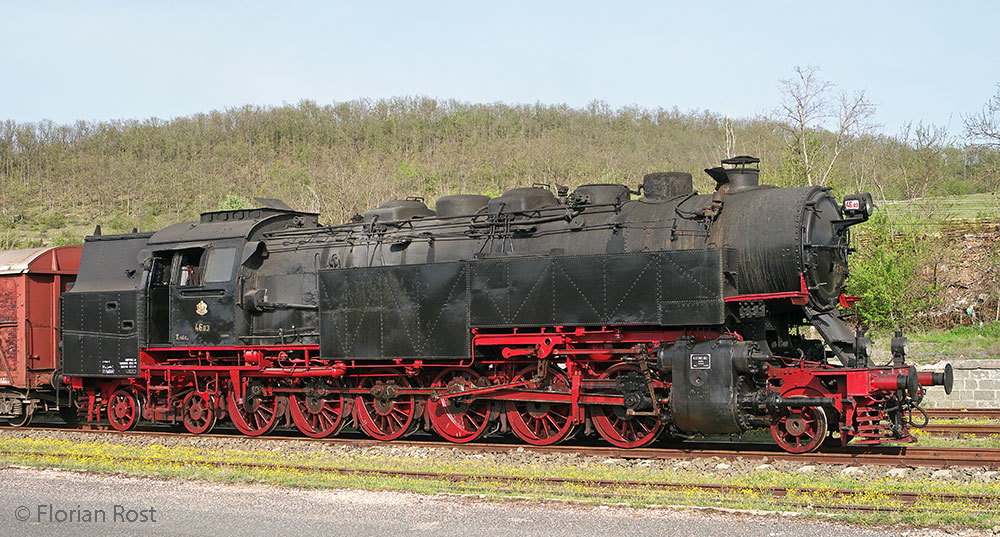 has fantastic landscapes and magnificent steam locomotives. Not long ago they overhauled two big steam locomotives and this made our decision to run a tour under the difficult circumstances much easier. One of these is a locomotive of the larger 2-10-0 German Kriegslok class 42, No.16.27, and the other is the remarkable monster 2-12-4 No.46.03, nicknamed “mother bear”. This is an engine which has no competitor all over , a really impressive locomotive. In addition we’ll pay a two day visit to the narrow gauge line from Septemvri to Dobriniste.

Currently, we have oral confirmation that they will add an elderly passenger coach to our trains - just as they did in the 1960ies and 70ies. 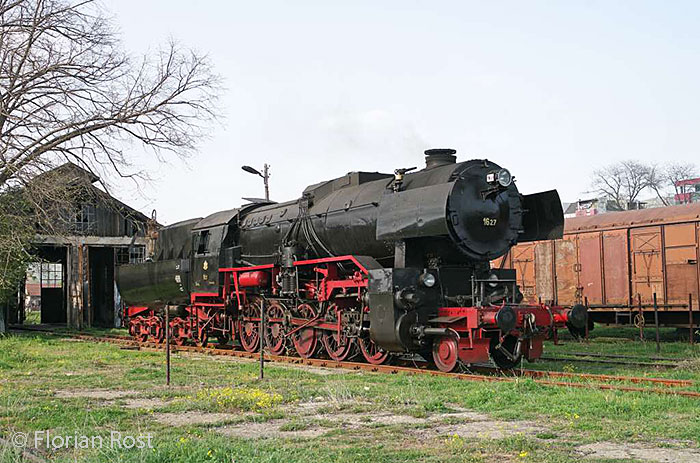 The chosen lines are, with the exception of the narrow gauge line, not the usual lines which almost every charter train tour in covers. Everywhere along our lines, bushes and trees are a problem for photography. That’s why it’s highly recommended you bring a handy saw with you to do the work the track gang should have done! 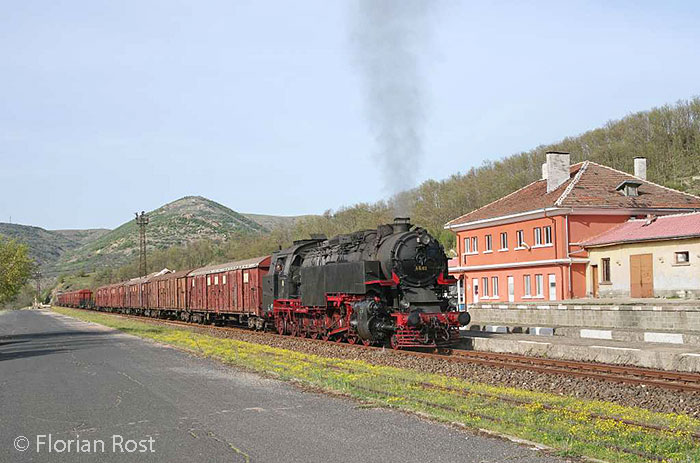 Levski is the starting point of two branch lines; one to the north to Svishtov, a nuclear power plant which will never produce any electricity, and the other to the south to Trojan. The line to Svishtov leads through mainly flat but partly hilly countryside. The highlight of this line is the harbour on the where you can still find loading cranes, something almost extinct at harbours handling containers these days. We’ll be able to shunt alongside these cranes and take some pictures from an almost bygone era. Because the authorities refused to turn the loco on the triangle within the nuclear power plant, we’ll go out tender first and return chimney first. On this line we’ll find some pleasant photo opportunities, beyond the usual arch viaduct and gorge photography.

However, steam railways used to not only pass through high mountains...

The line to the south leads into mountainous terrain, but trees along the line will prevent us from taking pictures at many locations. This beautiful line offers only a limited number of really good photo opportunities, but at sunrise you can take pictures before the line reaches the mountains.

Both lines offer photographic opportunities which could be found in the 1980’s, the last years of regular use of steam.

South-Eastern Europe used to be covered by extensive 760mm narrow gauge networks. Almost everything of this is history, except the narrow gauge line from Septemvri to Dobriniste, where you can still travel on a long distance narrow gauge railway. The Rhodope Mountain Railway was built only between 1921 and 1945. It’s operated by the state railway BDŽ. The line is 125km long and has 38 tunnels, terminal loops and gradients of up to 1 in 30 to conquer the altitude difference of more than 1,000 metres. Based on the Saxony VIIK, BMAG (formerly Schwartzkopff) developed a strengthened version with a longer wheelbase for this railway. Only 5 of the 15 locomotives ordered were delivered in 1941, the war hindered further deliveries. The locos were used on the BDŽ-lines Septemvri – Dobroniste and Varvara – Pazardjik sucessfully. After the war, Fablok in Chrzanów (Krenau) in delivered the missing locomotives between 1949 and 1950. One of them, 60976, is serviceable and will haul our charter trains. 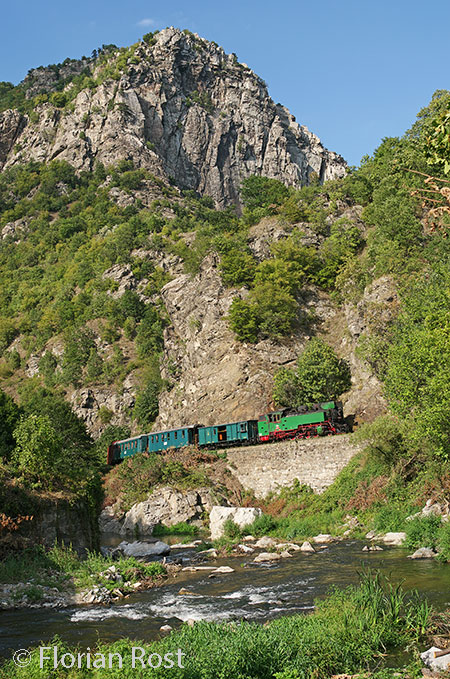 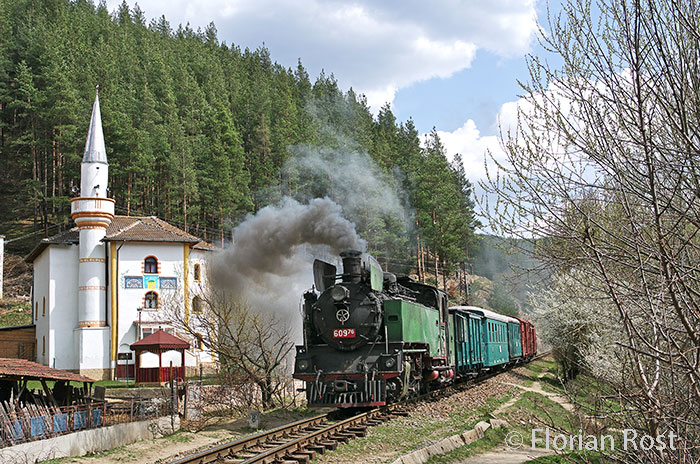 The line offers many nice views, semaphores signals and buildings. However, the partly parallel road has been modernised with crash barriers which spoil some of the positions. The climb is to the highest point of the network of BDŽ, Avramovo at 1,267 metres above the sea, and is mastered by several loops. The steepest section needs to be covered with a diesel helper. But photographically we’ll not miss anything as this section leads through dense and dark forest.

These days the line is served by 1,300 bhp strong diesel locomotives. The few passenger trains which still run make us wonder why the BDŽ still sticks to this line.

Between Radomir and Zemen there is not much worth photographing, but then the line sweeps into a scenic gorge. The vegetation along the line is a problem, as well as the limited space at some of the scenic spots. Our group needs to behave similar to the Lion’s Mouth in , where everyone got his shot despite the limited available space. Beyond Kjustendil the line climbs in some scenic curves uphill before it disappears into dense forests. Before it becomes covered in dense vegetation, we’ll do some shots of the sunrise in this winding section. Some kilometres before we reach Gjueshevo, the line becomes more and more open and we’ll find a good number of photo opportunities.

Close to its former area of operation on the main line, Sofia – Pernik, we’ll use the wonderful 46.03. It’s a very successful six-coupled design of 2-12-4 wheel arrangement. This two cylinder massive tank locomotive was delivered by Cegielski in Poznan (203/1936). 12 locomotives of this series (46.01 – 12) were built as a two cylinder design by Cegielski, and another eight (46.13 – 20) were designed as three cylinder locomotives by BMAG (formerly Schwartzkopff, manufacturer’s numbers 11794 to 11801). These millipedes have been and still are very impressive locomotives and, I’m sure, everyone who experiences this locomotive will be fascinated when it’s mastering the gradients. Over night we’ll transfer the locomotive via Sofia to the north, to make it available on another nice line further north.

This line serves a mine in the mountains. It sees relatively dense traffic. The line is challenging, partly overgrown, but still very well worth the effort of going there. There are some remarkable photo positions which need a certain effort to climb the hills, but the magnificent class 46 is well worth all the effort. We’ll probably cover the line twice (one time in the morning and another time in the afternoon) to make the most of it. 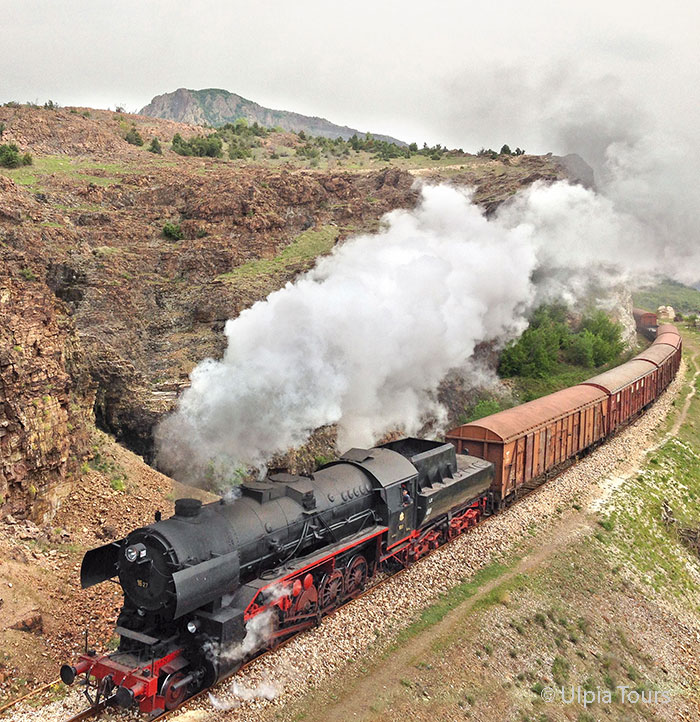 The Bulgarian State Railways are – expressed very gently – a very difficult partner for negotiations around charter trains, the way we want to offer them. These kinds of charter trains are not what they want to run because, due to the permanent reorganisation, everyone wants to avoid making any mistakes which could lead to the loss of their job. Only those who do nothing will never make a mistake! Hence, they prefer to do nothing. Responsibilities change quarterly anyway, so why care about something which will not be your responsibility in a few months anyway? They’d rather spend their time finding reasons why this or that is not working. They don’t give prices readily and once they do, they might add 20, 30 or even 50% to their already enormous prices just a few days before the tour starts! For that reason, you’ll see no contract until a few days before the tour’s date. It’s always a high risk announcing a tour to . Using common sense alone, you just wouldn’t do it and, hence, I’ve stopped negotiations about a tour to twice in the past. But now they have this monster, 46.03, and that’s the reason why madness won over intelligence and I published a tour! Having said that, the final words may not be exchanged yet! One of the strengths of Bulgarian railwaymen seems to be discussing every detail over and over again. These endless, useless, frustrating and untargeted discussions can only be minimised by handing over “colourful printed papers”. That’s why the estimated amount of tips will be hefty. But once these little papers have changed hands, some things become possible which weren’t under any circumstance only one second before. The senseless but widely used cliché “safety” is also well known by the Bulgarians, and you can stop anything and everything using this “argument”. Only a train which is standing still is really safe… 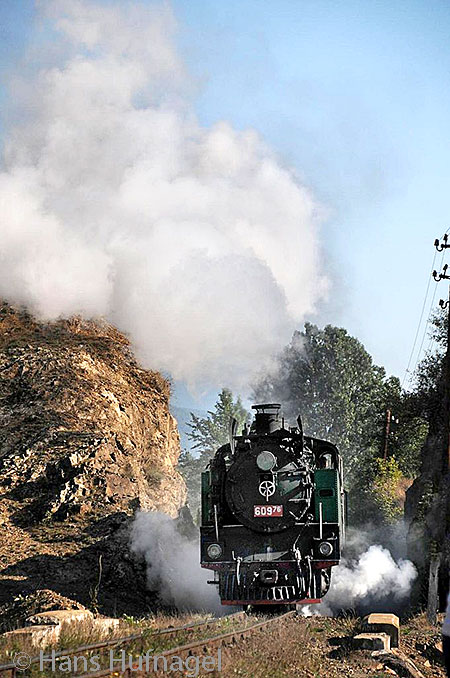 I must give the usual words of warning beforehand about the risks when you run a tour with steam locos involved in this age beyond steam. Take it as read when I say there might be problems. There may be failures and cancellations. No-one covers the full risk (and I’m not talking only about a loco failure) we’re incurring in offering this tour. Booked flights cannot be refunded free of charge and holidays you’ve booked cannot be compensated in the case that we have to cancel the tour. However, as we’re inside the European Union we expect to get at least a major part of our paid money back in the case that we can’t travel to .

The railway lines in are often encased in bushes and copses and some of the possible photo locations can’t be offered because of this. Other positions might be too tight to be possible for the whole group. In any case it’s helpful to bring some gardening equipment with you. We’ll travel before the spring green covers everything, so we have a good chance to get some very good pictures from this tour.

Delays are a problem which can occur at any time. The only timings for sure are the sunrise and the sunset: in Sofia 07.11 hrs and 19.52 hrs on March 31st. 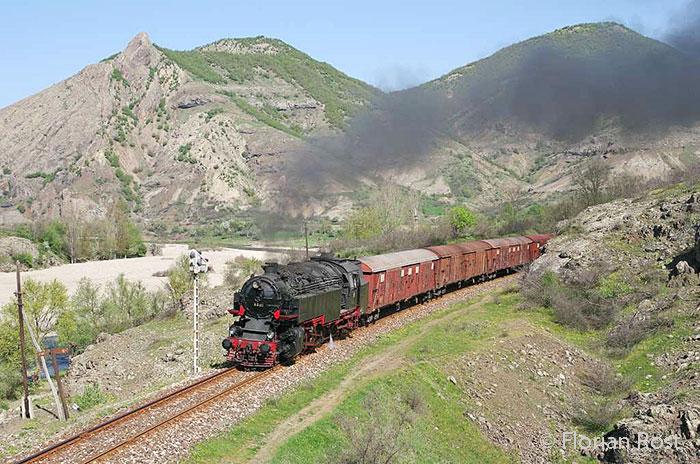 Our steam locomotives depend on a working water supply. This is always a big and sometimes unmanageable challenge for the state railways and requires much time … sometimes. You should expect that every small issue can be exaggerated into a big problem. Nowadays every idiot is able to handle his iPhone, but the number of people who are able to fill a bucket with water is shrinking.

is a country of the European Union and member of the Shengen convention. Many nationals only need their ID card, please check on the Immigration website whether your nationality can travel to visa-free. The country can be rated as safe, but of course you should always use common sense.

Occasionally meals will be provided as a packed meal. This is essential in order to make the most out of our time. We’ll not have any fixed times for  meals, and sometimes a meal might be cancelled as well.

The three locomotives we’ll use on our tour are all unique engines which cannot be replaced in case of a failure. There is no insurance or anything else which can cover the risk of technical problems. On the narrow gauge line a technical problem with the loco will terminate this part of the tour while on the standard gauge we can substitute a failed locomotive. But the highest risk on this tour isn’t the locomotives which could fail. It’s the erratic behaviour of some state railway employees. From experience, we need to fear that the BDŽ will add substantial amounts to the bill. Hence a “margin call” or the cancellation of the tour shortly beforehand can’t be ruled out. There is no cure for the “BDŽ risk“ and everyone who books the tour should be aware of this. In the case of cancellation of parts of the programme, or of the whole tour, we can only pay back what we receive back from the Bulgarians. Changes in the itinerary are possible at any time.

You’ll need little money in local currency. Food, some of which is not included, and beverages are quite cheap.

The tour is planned with the dedicated photographer and video filmmaker in mind. The itinerary is designed for those who think it more important to get the perfect shot and not necessarily to sample the local food, bars or nightclubs.

We’ll mainly use middle class hotels which may have problems meeting central European standards. Please remember that accommodation, buses and the railway itself do not necessarily conform to standards you expect. Safety and environmental standards are still not fully developed, so a word of warning: Please beware of the dangers in and around the railway and other modes of transportation. An accident and health insurance policy covering foreign countries is absolutely essential. Neither FarRail Tours nor the local company who arranges everything on the ground, nor the railways themselves can be held responsible for any incidents, accidents, delays, changes in the itinerary, cancellations etc. 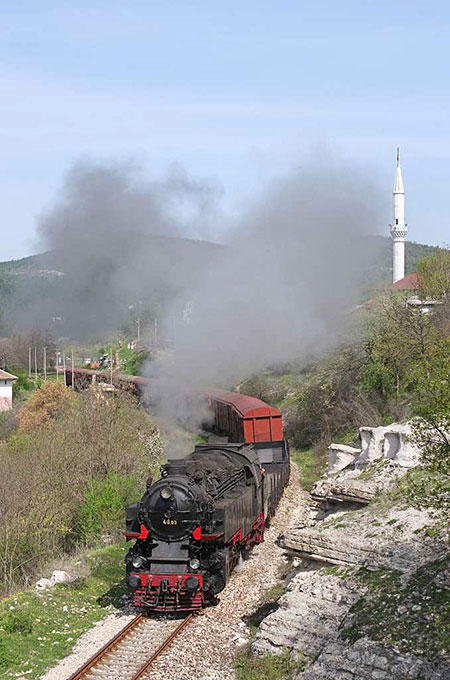 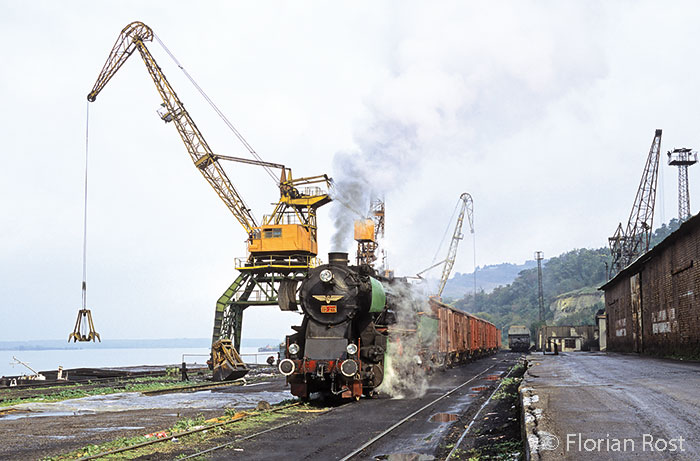